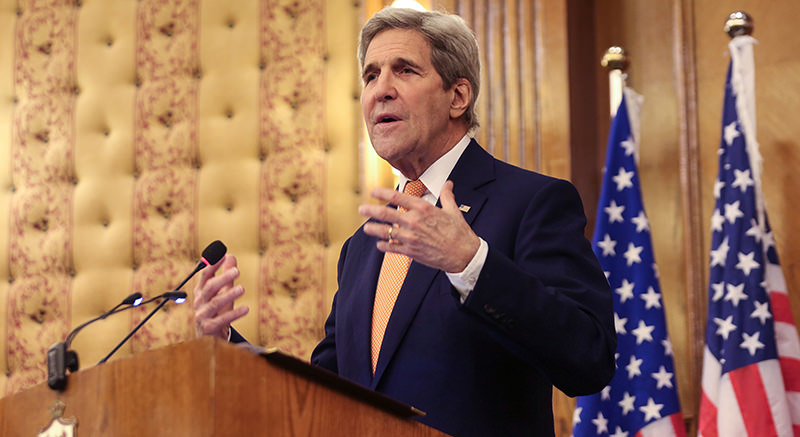 Citing Pentagon estimates, Kerry told a Senate committee that protecting a safe zone was more complicated than many anticipated.

"All this talk about safe zones does not go through the process of what it really means," he said. "Our Pentagon estimates that to have a true safe zone in the north of the country you may have upwards of fifteen to thirty thousand troops. Now are we ready to authorize that? Are we ready to put them on the ground?"

He said personnel and equipment would be needed to protect against airstrikes as well as ground attacks.

Turkey has long advocated a zone in northern Syria to protect refugees and allow the safe distribution of aid.

German Chancellor Angela Merkel has also pledged support for a no-fly zone in Syria as a way of dealing with refugee crisis in Europe.

Kerry's comments came a day after he told the Senate's foreign relations committee the U.S. is considering a "Plan B" should the cessation of hostilities deal agreed with Russia and announced earlier this week fail.

According to the UN, 250,000 people have been killed in the five-year civil war while more than 11 million have fled their homes, many to neighboring countries such as Turkey, Jordan and Lebanon.

The Turkish government says around 2.7 million Syrian refugees are living in the country. More than 1 million refugees entered Europe last year, many of them Syrians travelling via Turkey.

Turning to another regional troublespot, Kerry warned that Libya was in danger of becoming a failed state if the country's factions did not unite.

"We have been working really hard for the last months, particularly to bring together a government in Tripoli," he told lawmakers. "If they cannot get themselves together, yes, it will be a failed state."

The UN has made several attempts to reconcile the various warring factions in Libya but there is still no central unified government in the country where conflict has raged since the overthrown of Muammar Gaddafi in 2011.
Last Update: Feb 25, 2016 6:10 pm