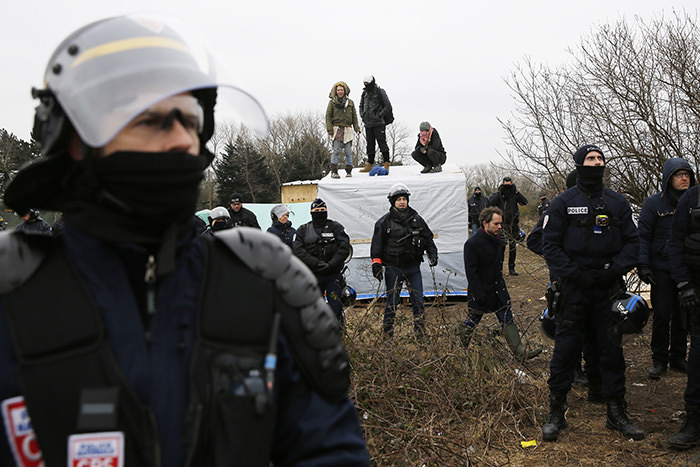 by Mar 01, 2016 12:00 am
Clashes broke out on Monday in the northern French port city of Calais between French riot police and migrants as authorities began destroying makeshift shelters in the grim shantytown on the edge of Calais known as the "Jungle." Police lobbed tear gas canisters at protesting migrants as around 20 workers moved in to start pulling down the shacks by hand, while an icy wind blew under blue skies. Two bulldozers stood by but were not used.

Migrants and members of the British No Borders activist group, who launched projectiles at the police, also set fire to about 20 of the shelters, according to an Agence France-Presse (AFP) photographer, and clashes continued late into the afternoon.

The demolition of the southern half of the camp began after a court petition by charities to stop the destruction was rejected last week. "It's infinitely sad to see the waste of so much work that we've done in the past months," said Maya Konforti of the Auberge des Migrants charity. Volunteers and aid workers have spent months trying to improve conditions in the camp, built on a former toxic waste dump on the outskirts of Calais.

Local authorities promised that no one will be evacuated by force, say that 3,700 people live in the camp and that only 800 to 1,000 will be affected by the eviction. But charities say their recent census counted at least 3,450 people just in the southern part, including 300 unaccompanied children. The evicted migrants have been offered heated accommodation in refitted containers near the camp, but many are reluctant to move into these because they lack communal spaces and movement is restricted.

The demolition of the Jungle precedes talks on Thursday between French President François Hollande and British Prime Minister David Cameron. Britain has put substantial pressure on France to stem the flow of migrants across the Channel, and has funded a huge increase in security measures around the port and tunnel in Calais.

There was calm on Monday night in the Jungle migrant shantytown after an evening of violence. Workers on Tuesday were due to start a second day of destruction in the southern half of the camp, where thousands of migrants and refugees live.
Last Update: Mar 01, 2016 2:29 pm
RELATED TOPICS