Macedonia reopens border with Greece for a trickle of refugees 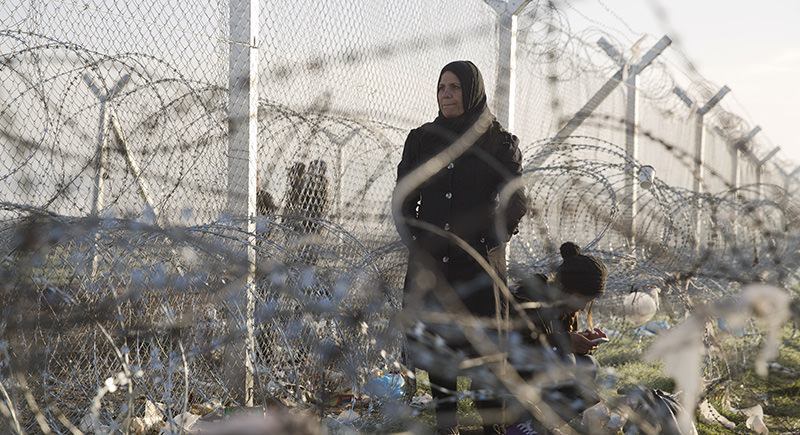 A woman stands while another crouches down to check her mobile phone near the border crossing in front to a wire fence that separates the Greek side from the Macedonian one at the northern Greek border station of Idomeni (AP Photo)
by Associated Press Mar 02, 2016 12:00 am
Macedonia intermittently opened its border with Greece to a tiny trickle of Syrian and Iraqi refugees Wednesday, leaving about 10,000 more people camped on the Greek side, with more arriving daily.

The border bottleneck has left at least 25,000 people stranded in Greece, the first European country that refugees reach in smuggling boats. As the prosperous but divided continent flails in search of a workable solution, individual countries led by Austria have imposed immigration caps that have caused a domino effect down the Balkan immigration corridor, which has been traversed by a million people over the past year.

Greek police say Macedonian police opened the Idomeni crossing at midnight Tuesday and 7 a.m. Wednesday, each time for two hours. They admitted a total of 170 people from Syria and Iraq the only nationalities allowed to continue north.

Hundreds, including many families with small children, arrive daily at Idomeni in northern Greece, where two official camps are so full that thousands have set up tents in fields all around.

Macedonia says it will only allow in as many refugees as Serbia, its northern neighbor, accepts each day.

A field official with the United Nations refugee agency on the Macedonian side of the crossing said authorities will soon send a train with about 500 people from the nearby town of Gevgelija to the Serbian border. He spoke on condition of anonymity because he was not authorized to brief the media.

Jasmin Rexhepi, head of the aid group Legis, told The Associated Press that a group of about 50 Pakistanis remain trapped for a fourth day on the Macedonian side of the border between two razor-wire fences. He said Macedonian authorities are trying to send them back to Greece because the group crossed the border illegally.

Rexhepi also said that about 1,000 refugees 750 Afghans and 250 Iraqis are stuck at Macedonia's border with Serbia, which has refused them entry.

In Greece, arrivals by smuggling boats from Turkey on the eastern Aegean Sea islands continue at a rate of nearly 2,000 a day. More than 120,000 have landed so far this year, on top of 850,000 in 2015. A string of hastily thrown-up transit camps on the mainland has rapidly filled up, and hundreds are sleeping rough in a central Athens square.

Authorities have restricted the flow of migrants from the islands to Athens' port of Piraeus, where about 1,000 people still arrived by ferry by midday Wednesday.
Last Update: Mar 02, 2016 1:55 pm
RELATED TOPICS