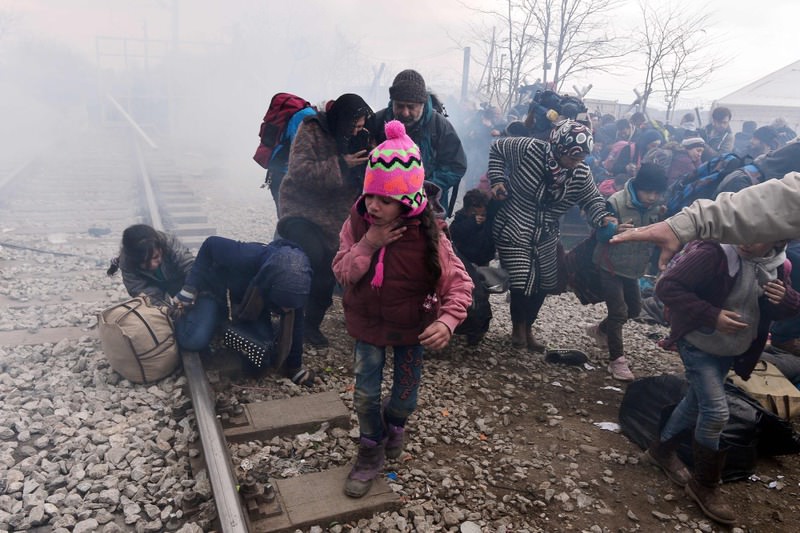 A child coughs as people run away after Macedonian police fired tear gas at hundreds of Iraqi and Syrian migrants who tried to break through the Greek border fence in Idomeni on Feb. 29.
by Daily Sabah with Wires Mar 02, 2016 12:00 am

More clashes are feared as the Greek-Macedonian border, where migrants are trapped, and the Calais migrant camp in France witnessed fierce clashes on Monday while European leaders continue to bicker over the migrant crisis

Macedonian police fired tear gas to disperse hundreds of migrants who stormed the border from Greece and clashes broke out between French riot police and migrants in Calais on Monday as a deeply divided Europe traded barbs over the biggest humanitarian crisis in decades.

As frustrations boiled over at restrictions imposed on people moving through the Balkans, migrants trapped on the Greece-Macedonia border tore down a metal gate in the barbed wire fence. A Reuters witness said Macedonian police fired several rounds of tear gas into the crowd and onto a railway line where other migrants sat refusing to move, demanding to cross into the country.

Volunteer doctors said at least 22 migrants, including 12 children, were treated for breathing difficulties and cuts. Authorities in Macedonia said one police officer was injured and that dozens of special forces officers were flown in by helicopter to help quell a refugee protest.

"Tragically, there seems to be more willingness among European countries to coordinate blocking borders than to provide refugees and asylum-seekers with protection and basic services," said Giorgos Kosmopoulos, head of Amnesty International in Greece.

Some 7,000 migrants, mostly from Syria, Iraq and Afghanistan, are crammed into a tiny camp at the Greek border village of Idomeni, and hundreds more are arriving daily.

"Of course Greece, over the next one or two months, will do what it can to help these people. But it must be made clear that the burden of this crisis must be distributed in Europe," Greek Prime Minister Alexis Tsipras said in an interview with private Star television. German Chancellor Angela Merkel, facing the biggest test of her decade in power, on Sunday rejected any limit on the number of refugees it allows in despite divisions within the government over the issue. "It is my damn duty to do everything I can so that Europe finds a collective way," she told state broadcaster ARD. "We can't do this in such a way that we simply abandon Greece," she told public ARD television. "This is exactly what I fear: When one country defines its limit, another must suffer. That is not my Europe."

The border bottleneck began 10 days ago when Austria and four countries on the Balkan migrant route north into Western Europe cut border access for migrants to a trickle. So far, border closures have not stopped migrants from coming.

European Council President Donald Tusk was set to begin a of tour of those countries yesterday starting in Vienna, which has been strongly criticized by other EU nations for its caps on asylum-seekers, and ending Thursday in Athens.

There were an estimated 22,000 migrants and refugees trapped in Greece on Monday, some sleeping rough in central Athens, some in an abandoned airport and at the 2004 Olympic Games venues. "Very many people were forced to sleep in the open, without tents, wrapped in blankets," said 45-year-old Syrian refugee Nidal Jojack, who has been camped out with her family at Idomeni for three days. "It was very cold. The borders are effectively closed, it's a huge problem. To get food, we have to wait in very long queues." Jojack said she hopes to reach Germany where her 18-year-old son has already arrived.

Nearly 100 foreign police officers from countries including Serbia, Croatia, Slovenia and Austria were deployed in Macedonia, he said, adding the figure could go up to 350. In a speech to the U.N. Human Rights Council in Geneva, he said that "encouraging" cooperation had been established with Greece on the issue but that it may not be enough.