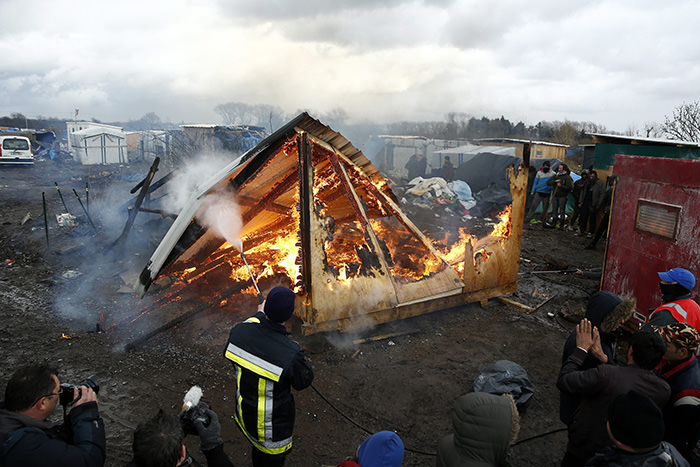 A shelter is set on fire at the makeshift migrant camp, the 'Jungle', as workers assist in the demolition, in Calais, France, 02 March 2016 (EPA Photo)
by Mar 04, 2016 12:00 am
France's interior minister on Friday sought to defuse a row over the fate of refugees in Calais should Britain leave the EU, saying there was "no question" of letting them freely cross the Channel.

"If we open the border tomorrow, what will happen? The British, who run their own border, will block them and send them back," Bernard Cazeneuve said on BFMTV.

He said this would only increase the flow of people and "aggravate a humanitarian problem".

"We don't need statements that create buzz on this topic, we need long-term action."

The row broke out Thursday when France's outspoken Economy Minister Emmanuel Macron raised the possibility of camps similar to the so-called Jungle shantytown at Calais springing up on Britain's southern coastline.

He told the Financial Times that a so-called Brexit would scupper a bilateral agreement that allows Britain to conduct border controls on the French side of the border.

"The day this relationship unravels, refugees will no longer be in Calais," Macron told the newspaper.

Asked about his comments during a summit meeting with British Prime Minister David Cameron, President Francois Hollande merely warned that "there will be consequences (to) the way in which we manage migration issues" if Britain voted in a referendum to leave the EU.

Cameron warned last month that a Brexit could mean British border checks being removed from Calais and that "there would be nothing to stop thousands of people crossing the Channel overnight."

But campaigners in favour of Britain leaving the 28-member bloc accused Cameron of scaremongering.

Observers are skeptical that France would make a move that would only draw thousands more refugees to its northern coast.

Thousands of refugees fleeing poverty and war in the Middle East and North Africa have gathered in the "Jungle", from where they make desperate bids to reach Britain.

The French government this week began dismantling the southern half of the camp, facing protests from residents who do not want to leave.

Firmly set on crossing the Channel, the refugees fear that if they move to better accommodation provided for them, they will be forced to apply for asylum in France.
Last Update: Mar 04, 2016 1:38 pm
RELATED TOPICS