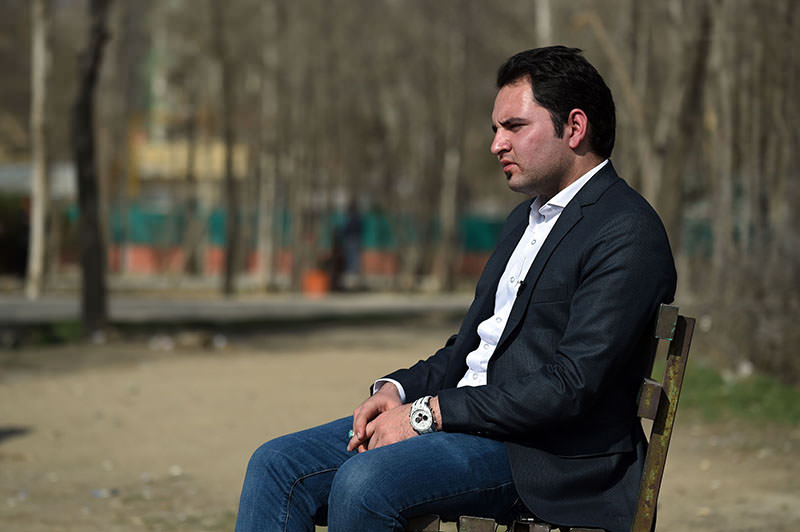 In this photograph taken on March 1, 2016, Abdul Ghafoor Aryan, 24, looks on as he speaks during an interview with AFP at the Hisa-i-Awali Khair Khana Park in Kabul (AFP)
by French Press Agency - AFP
Mar 07, 2016 12:00 am
After risking death on the migrant trail and two months in "nightmarish" refugee centres in Germany, Mohammed Asif bought a one-way ticket back to Afghanistan, relinquishing his lifelong dream of asylum in Europe.

Afghans are the second-largest migrant group -- behind Syrians -- arriving in Europe, where authorities are struggling to cope with the continent's worst refugee crisis since World War II.

A small but growing number, like 26-year-old Asif, are now returning to their country torn by war and gripped by economic malaise, as overcrowded refugee centres, a lack of jobs and the rise of anti-immigrant fervour in Europe leave them disillusioned.

"I thought Europe would offer me a comfortable life, but I found only hostility and pain," said Asif, who has a graduate degree in economics and left for Germany with a people-smuggler last year.

"The refugee camps were nightmarish and Europeans kept humiliating us all the time. Many of them say refugees will destroy the culture of their country," he told AFP, after returning to Kabul.

A chartered plane last month brought 135 disillusioned Afghan refugees back from Germany, in what is likely to be the first of many such flights organised by Kabul, Berlin and the International Organization for Migration (IOM).

Afghanistan is witnessing what local officials call an "unprecedented" migration towards European nations as tens of thousands of civilians flee decades of turmoil and war tearing their country apart.

But many realise, rather belatedly, that most smugglers sell them a pack of lies about big mansions, lucrative jobs and a cosy life in Europe.
"The most dangerous part of my long journey to Europe was from Iran to Turkey," Asif recalled.

"There was an overweight Afghan boy in our group who was struggling to walk through the mountains. The smuggler was cruel -- he gave him a kick and he went tumbling down the slopes. We never found his body."

Europe faces what politicians call an existential threat from the migrant crisis.

Figures show 1.25 million asylum seekers poured into Europe in 2015 -- twice as many as the previous year -- fleeing war and poverty in Syria, Afghanistan, Iraq and elsewhere in the Middle East and North Africa.

Many European nations launched slick media campaigns and dire warnings to dissuade would-be migrants from making the trip, but that did not slow the influx.

Only a fraction of those Afghans -- around 1,000 in total -- have requested to leave Germany and return home, according to the IOM.

Afghan officials are keen to reassure the returnees that they have a future in the country, even though pessimism abounds about the deteriorating war and a slumping economy.

Those who returned on the chartered plane were greeted at the airport with signs saying: "Welcome home. Afghanistan needs you."

Abdul Ghafoor, 24, said he paid a smuggler $7,500 to take him to Europe, a sum well beyond his means, but after three miserable months near the central German city of Frankfurt, he longed for home.

"The refugee camps were uninhabitable, the toilets were filthy and every meal comprised of just jam and butter," said Ghafoor, who is downbeat about employment prospects following his return.

"We were treated like second-class refugees compared to Syrians, who were offered a lot more facilities. Afghans deserve as much as Syrians."

Many are also leaving as countries such as Germany tighten rules that allow refugees to send for their family members.

"Leaving their country is especially difficult for young male migrants because of the family separation," said Jochen Oltmer, a migration expert at Germany's Osnabruck University.

"Some start returning home once they realise that it will be years before they can bring their families."
Last Update: Mar 07, 2016 9:54 am