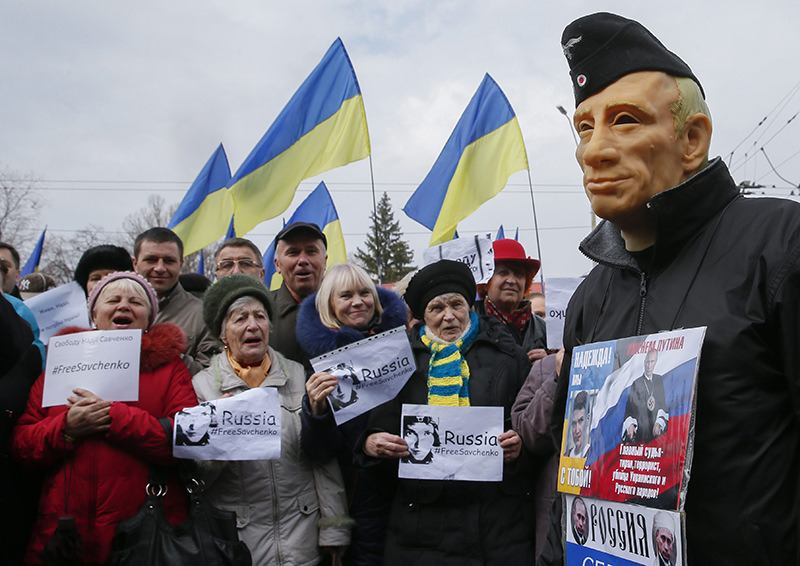 Protesters hold placards reading 'Free Savchenko' near a man wearing a mask depicting Putin during a rally in front of the Russian embassy in Kiev, Ukraine. (EPA Photo)
by Anadolu Agency Mar 09, 2016 12:00 am
Members of the European parliament have called for "personal sanctions" on Russian President Vladimir Putin and 28 other Kremlin officials in response to the detention of Ukrainian pilot Nadiya Savchenko since July 2014.

"All power in [Russia] is concentrated in the hands of President Vladimir Putin. He is the one responsible for the political decision to detain Nadiya Savchenko despite the appeals of the international community," the letter said.

"We hereby appeal to you to take all necessary steps in order to initiate at the EU level the imposition of personal sanctions against those officials of the Russian Federation who are involved in the kidnapping, unlawful detention, imprisonment and fabrication of charges against Nadiya Savchenko," it added.

The sanctions include forbidding people on the list from entry into the EU, blocking access to their bank accounts and seizing their property if located on EU territory.

Savchenko is accused of killing two Russian journalists with artillery fire during fighting in eastern Ukraine on June 4, 2014. Her lawyers deny these charges and say she was kidnapped on Ukrainian grounds in June and then taken to Russia.

Savchenko faces 23 years in prison if a Russian court finds her guilty.