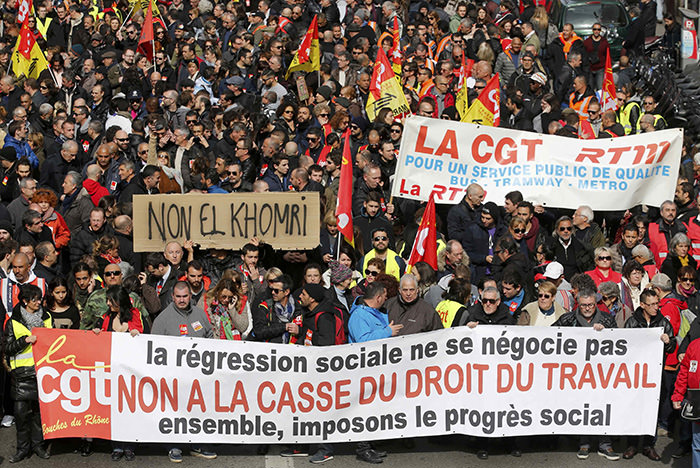 French labour union workers attend a demonstration against the French labour law proposal in Marseille, France, as part of a nationwide labor reform protest, March 9, 2016 (Reuters Photo)
by Mar 09, 2016 12:00 am
High school pupils and workers protested across France Wednesday against deeply unpopular labor reforms that have divided the Socialist government and raised hackles in a country accustomed to iron-clad job security.

Teenagers and students were expected to be among the most vocal demonstrators against reforms they fear will render their future even more unstable, and gathered from early morning despite pouring rain in many cities.

Pupils blocked entry to several schools in Paris at the start of the day of protests that was compounded by a rail strike over a wage dispute that left many commuters stranded for hours.

France's government has faced massive blowback -- including from within its ranks -- to measures that would give bosses more flexibility in hiring and firing.

The reforms aim to bring down a record 10.2-percent unemployment rate, which is more than double that for young people.

The proposed new law also cuts overtime pay for work beyond 35 hours -- the working week famously introduced in the 1990s in an earlier Socialist bid to boost employment. In some sectors, young apprentices could work 40 hours a week.

An online petition against the El Khomri draft law, named after Labour Minister Myriam El Khomri, has attracted more than a million signatures, while a poll showed seven in 10 people were opposed to the planned changes.

President Francois Hollande, who campaigned on a promise to improve the prospects of young people, said on the eve of the protests that he wanted to help them "have more job stability".

"We must also give companies the opportunity to recruit more, to give job security to young people throughout their lives, and to provide flexibility for companies."

Prime Minister Manuel Valls on Monday kicked off three days of talks with unions in a bid to salvage the law, after the chorus of opposition derailed a plan to submit the proposals to the cabinet this week.

The turmoil created by the proposals has struck yet another blow to Hollande and Valls, who have come under attack from leading members of the Socialist party for being too pro-business and shifting to the right.

Whether over economic reforms or plans to strip convicted terrorists of their nationality, the government has faced howls of protest from the left flank of the party at almost every turn.

'Don't be afraid of change'

Those backing the reforms believe they are essential to reviving a stagnant economy, creating jobs and remaining competitive, and El Khomri has argued that a lot of the opposition to her law is the result of misinformation and false rumours.

Outspoken Economy Minister Emmanuel Macron told France radio on Tuesday that unemployment had not dropped below seven percent in 30 years.

"Have we tried everything? Let us look outside France. What has happened elsewhere? They have all evolved, they have all done things," he said.

Italian Prime Minister Matteo Renzi, whose country has adopted similar reforms -- as has Spain and Britain -- said Tuesday after talks in Venice with Hollande that the French "should not be afraid of change."

"Since then, couples have finally been able to buy houses, have children and so on."

Le Parisien newspaper said in an editorial Tuesday that France's labor code was "not adapted to our era".

"Denying the need to reform is to deny that the world around us is moving, that our social system is on its last legs and unemployment is not budging," it said.

French employers are reluctant to take on permanent workers because of obstacles which prevent them laying them off in lean times.

Young people leaving university find themselves working temporary contracts for years at a time or doing internship after internship while hoping to secure a job.

Along with tweaks to working hours, the reforms identify precise conditions such as falling orders or sales, or operating losses, as sufficient cause for shedding staff.
Last Update: Mar 09, 2016 9:47 pm
RELATED TOPICS