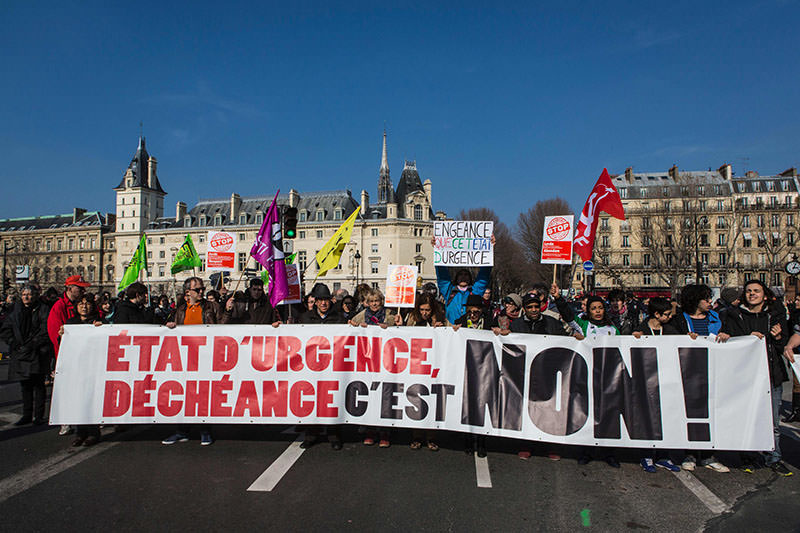 Protestors hold a banner during a demonstration against the state of emergency in France called by the C ollective Against Islamophobia in France (AFP)
by Anadolu Agency Mar 12, 2016 12:00 am

Hundreds of people have protested in Paris against a draft bill that calls for stripping citizenships of extremists and enhancing powers of state authorities even further in the aftermath of recent terrorist attacks in France.

The Collective Against Islamophobia in France, a Paris-based nongovernmental organization, along with several other groups and leftist political parties in the country participated in the march.

They marched from the iconic Saint-Michel Square to Luxembourg commuter rail station, where the Senate is located.

Yasser Louati, spokesman for the anti-Islamophobia organization, said precautions taken by the government under pretext of fight against terrorism had all been proven unsuccessful.

Louati said a total of 3,400 houses and workplaces had been searched so far by the police, but only five people ended up being sued for alleged terrorist links since the state of emergency was declared following the deadly Paris attacks in November 2015.

"The aim is not an anti-terror fight. Mosques, halal restaurants, women wearing headscarves have been targeted. Doors have been smashed and houses rummaged. By making Muslims pay for the attacks, the state says: 'Look, I am fighting against terror'," he added.

France introduced a 12-day state of emergency within hours of the Daesh-claimed attacks that killed 130 people on Nov. 13 last year. The parliament later extended it for further months.

The draft 'Protection of the Nation' package consists of constitutional amendments aimed at including the state of emergency in the constitution as well as stripping citizenships from all French nationals convicted of terrorist offenses.

This is instead of axing citizenship from convicted terrorists with dual nationalities, as initially conceived.

It also strengthened controversial "anti-terrorism" powers for the police forces, including the right to conduct house raids without a warrant.

Several national and international human rights bodies have criticized France's state of emergency and other measures taken in the aftermath of the terror attacks.

Human Rights Watch and Amnesty International issued reports in February pointing towards the harmful effects of the state of emergency, which seem to have been especially felt by the French Muslim community in the country.