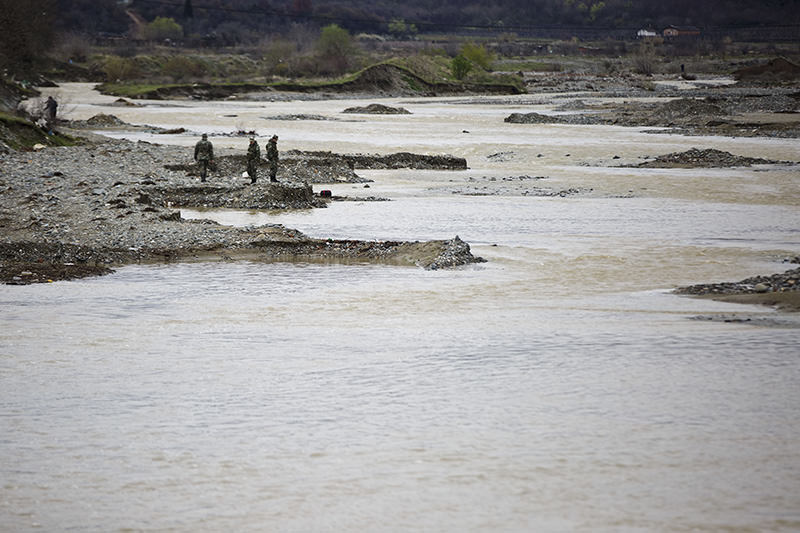 Macedonian soldiers scout for bodies of drowned refugees on the river bank of Suva Reka river near the southern Macedonian town of Gevgelija, March 14, 2016. (AP)
by Mar 14, 2016 12:00 am

The two men and a woman were part of a 26-member group sneaking through the border, which Macedonia sealed to refugees last week, causing a massive backlog of people on the Greek side.

The drowning occurred in Suva Reka, near the village Moin, 4 kilometres west of the refugee camp at Idomeni. The small river had swelled after days of relentless rain in the region.

Thousands of refugees, mostly Syrian and Iraqis, have been stranded at Idomeni after Balkan countries first restricted, then stopped the flow of refugees toward wealthy EU countries.

Aid organizations have voiced concern that stifling the regulated migration flow could lead to the smuggling of people and potentially dangerous attempts at sneaking across borders.

In the Aegean Sea, meanwhile, rescuers were searching for eight refugees missing after their boat overturned in the rough sea early Monday morning.

Greek coastguard spokesman Nikos Langadianos told national TV that five people were rescued near the island Kos as one vessel each from the Greek and Italian coastguard, along with a helicopter, searched the sea for survivors.

At least 455 have drowned in the Aegean Sea this year alone, according to data from the International Organization for Migrations.

More than 995,000 people have made the eastern Mediterranean crossing since 2015, 139,000 of them since the start of the year, the UN refugee agency (UNHCR) reports.

From Greek islands, the people are ferried to Athens, then had typically continued their trip north and west, through Macedonia, Serbia, Croatia, Slovenia and Austria.

Countries on the Balkan route have been gradually restricting the flow, first stopping all but Syrians and Iraqis and, eventually, starting March 9, barring entry to all.

The European Union is now negotiating a deal with Turkey to also stem the number of asylum seekers who attempt to cross the Aegean Sea.