Mother Teresa to be made a saint, Pope says 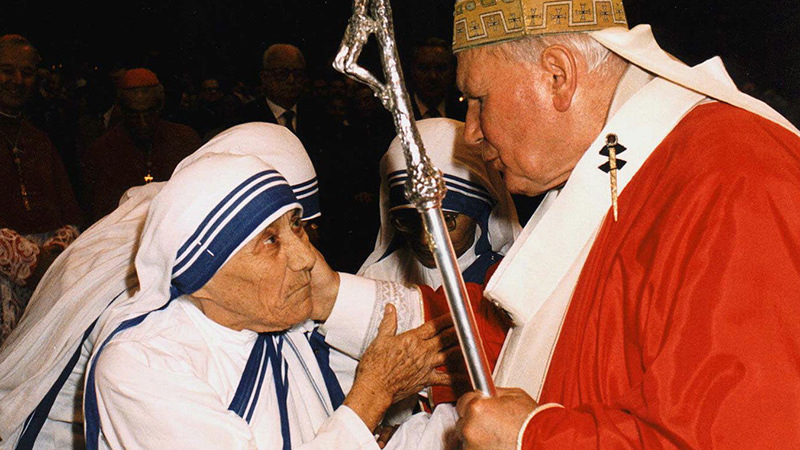 Mother Teresa will be made a saint on Sept. 4.

Pope Francis set the canonization date Tuesday, paving the way for the nun who cared for the poorest of the poor to become the centerpiece of his yearlong focus on the Catholic Church's merciful side.

The announcement was expected after Francis in December approved a second miracle attributed to Mother Teresa's intercession the final hurdle to make her a saint. The actual date falls on the eve of the 19th anniversary of her death.

The ceremony will draw tens of thousands to honor the tiny, stooped nun who was fast-tracked for sainthood just a year after she died in 1997. St. John Paul II, who was Mother Teresa's greatest champion, beatified her before a crowd of 300,000 in St. Peter's Square in 2003.

Born Agnes Gonxha Bojaxhiu on Aug. 26, 1910, in Skopje, Macedonia, Mother Teresa joined the Loreto order of nuns in 1928. In 1946, while traveling by train from Calcutta to Darjeeling, she was inspired to found the Missionaries of Charity order.

The order was established four years later and has since opened more than 130 houses worldwide to provide comfort and care for the needy, dying, sick and "poorest of the poor."

Mother Teresa won the Nobel Peace Prize in 1979 for her work with Calcutta's destitute and ill work which continued even after she herself became sick. She died on Sept. 5, 1997, at age 87. At the time, her Missionaries of Charity order had nearly 4,000 nuns and ran roughly 600 orphanages, soup kitchens, homeless shelters and clinics.

"She built an empire of charity," said the Rev. Bernardo Cervellera, editor of the Vatican-affiliated missionary news agency AsiaNews. "She didn't have a plan to conquer the world. Her idea was to be obedient to God."

For the Catholic Church, saints are model Christians who, after death, live in paradise and can make miracles happen by summoning God's intervention when prayers are addressed to them.

The process for Catholic canonization - the technical term for recognized sainthood - starts with a local bishop acknowledging that a candidate enjoys a mass following and is worthy of being proposed as a saint.

Usually this cannot happen until five years after a would-be saint's death, but there are exceptions, such as in the case of Mother Teresa of Calcutta: she passed away in 1997, and the process got underway in 1999.

Candidates are then given the "Servant of God" title and their cause is passed on to the Vatican. If their "heroic virtues" are recognized by experts, cardinals and the pope, they are promoted to the rank of "Venerable."

Beatification, giving right to the "Blessed" title, follows. Elevation to that rank normally requires the attribution of a miracle, typically the healing of a sick person that cannot be explained medically.

Sainthood is usually on the cards if a candidate is recognized as having brought about a second miracle.

The entire process can take decades or centuries, but popes can speed up cases as they see fit, and waive normal requirements. Martyrs - people killed for their faith - are usually spared at least one miracle recognition.

There is no overall count of recognized saints in the Catholic Church. Before 1588, when formal canonization rules were introduced, saints were usually declared by popular acclamation. The title was given to almost all early Christian martyrs.

From 1978 to 2005, John Paul II recognized 482 saints, as opposed to 296 canonizations in the previous four centuries. The pace has intensified under Francis: since his 2013 election, 838 more saints have been declared, including John Paul II.