FlyDubai plane crashes in Russia, all 62 on board killed 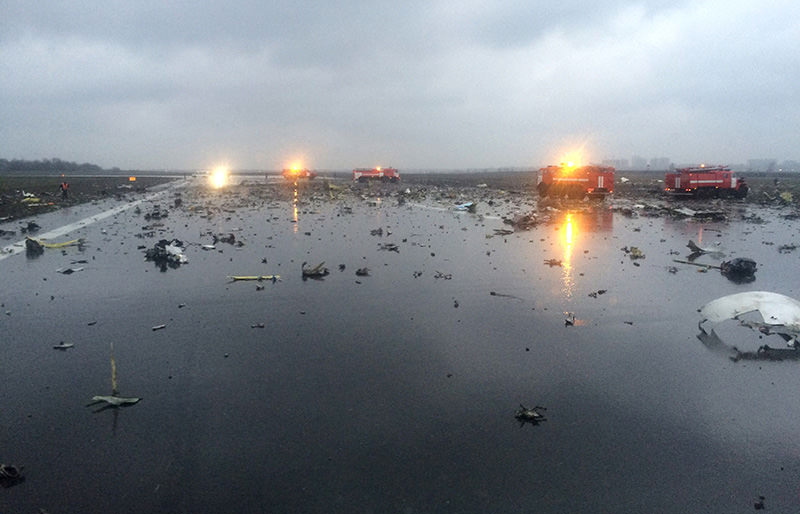 A Dubai airliner with 62 people on board crashed and caught fire early Saturday while landing in strong winds in the southern Russian city of Rostov-on-Don, killing all aboard, officials said.

A list published by the Emergencies Ministry showed the Boeing 737-800 operated by FlyDubai was carrying 55 passengers; 33 women, 18 men and 4 children. The passengers were mostly Russian, with Ukrainian, Indian and Uzbek nationals also on board. There were also seven crew members on board, whose nationalities were not immediately known. Russia's Emergencies Ministry said that all had been killed.

It was the budget carrier's first crash since it began operations in 2009. In a statement, FlyDubai confirmed that Flight 981 crashed on landing and there were no survivors. Four children were among those killed, it said.

"Our primary concern is for the families of the passengers and crew who were on board. Everyone at FlyDubai is in deep shock and our hearts go out to the families and friends of those involved," said CEO Ghaith al-Ghaith.

Vasily Golubev, the governor of the Rostov region some 950 kilometers (600 miles) south of Moscow, was quoted by Russian news agencies as telling local journalists that the plane crashed about 250 meters (800 feet) short of the runway.

The Russian Emergencies Ministry said the plane clipped the ground with its wing and caught fire.

State news agency Tass said weather data from the area indicated that winds were anywhere from 14 to 22 meters per second (30-50 miles per hour) at the time of the crash and that there was light rain.

Ian Petchenik, a spokesman for the flight-tracking website Flightradar24, told The Associated Press that the plane missed its approach then entered a holding pattern and tried to land again before contact was lost.

The website reported that the plane was circling for about two hours before making another attempt to land.

The Investigative Committee of Russia said on Saturday that it is looking into a pilot error or a technical failure as the most likely causes for the plane crash that killed 62 in southern Russia, Russian news agencies reported.

"At present, we are looking into two main theories for the plane crash in Rostov-on-Don: pilot error in connection with deteriorating weather conditions or a technical error," Interfax news agency cited a representative of the Committee, Oksana Kovrizhnaya, as saying.

FlyDubai was launched in 2008 by the government of Dubai, the Gulf commercial hub that is part of the seven-state United Arab Emirates federation. Its first flight took to the skies in 2009.

It shares a chairman with Dubai's government-backed Emirates, the Middle East's biggest airline, though the two carriers operate independently and maintain separate operations from their bases at Dubai International Airport, the region's busiest airport.

FlyDubai's fleet is dominated by relatively young 737-800 aircraft, the same model as the one that crashed. The airline says it operates more than 1,400 flights a week.

The airline has expanded rapidly in Russia and other parts of the former Soviet Union. Dubai is a popular tourist destination for Russian visitors, who are attracted by its beaches, shopping malls and year-round sunshine. Like other nationalities, many Russian expatriates live and work in Dubai, a city where foreigners outnumber locals more than 4-to-1.

It has been flying to the southern city of Rostov-on-Don since 2013.

FlyDubai has a good safety record. In January 2015, one of its planes was struck on the fuselage by what appeared to small-arms fire shortly before it landed in Baghdad. That flight landed safely with no major injuries reported.

On Oct. 31, a Russian airliner blew up in the air over Egypt's Sinai Peninsula, killing all 224 aboard. Investigators determined it was destroyed by a bomb onboard.