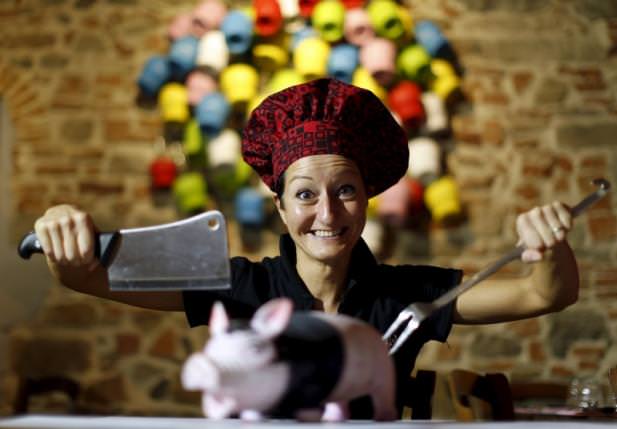 Italian chef Cristina Palanti poses with a meat cleaver and cooking fork hovering over a plastic pig figurine at the 'L'e'Maiala' restaurant in Florence on October 6, 2012. (REUTERS Photo)
by Daily Sabah with Reuters Mar 19, 2016 12:00 am

Fried cow's brains, a Florentine specialty, is now one of the dishes Italy's art capital has ordered to sell under the name local cuisine and produce.

It seems that Florence has become the latest Italian tourist destination to adopt the mantra "you are what you eat", and is now requiring shops and restaurants to make sure that 70 percent of their food comes from the surrounding region.

Not everyone is happy about getting rid of the endless diversity in the city, but local governments strongly protest that foreign food disrupts the 'decorum' of their beloved city.

"We are seeing an unstoppable distortion in our cultural heritage, of which food is a part," Mayor Dario Nardella wrote on his Facebook page.

"A restaurant opens every week in Florence, not to mention minimarkets and Asiamarkets," he said, apparently referring to food and drink shops often run by immigrants and open all hours.

Promoting a short supply chain and seasonal eating has been fashionable in Italy for years, promoted by the Slow Food movement and upmarket food hall chain Eataly. But now local governments are turning up the heat.

Last month for example, Verona Mayor Flavio Tosi said he would not allow new kebab shops to open in the center of the city where William Shakespeare set "Romeo and Juliet".

Similarly, in October, a French mayor had declared "war" on kebabs and said that he would not permit new kebab restaurants to be opened within the borders of his town, Beziers.

These measures have prompted a mixed reaction among Italy's legion of gastronomic pundits and business people, some noting that local products could also be of low quality while others said the move would help defend local biodiversity.

His comments have been seen as discriminatory against immigrants and minorities.