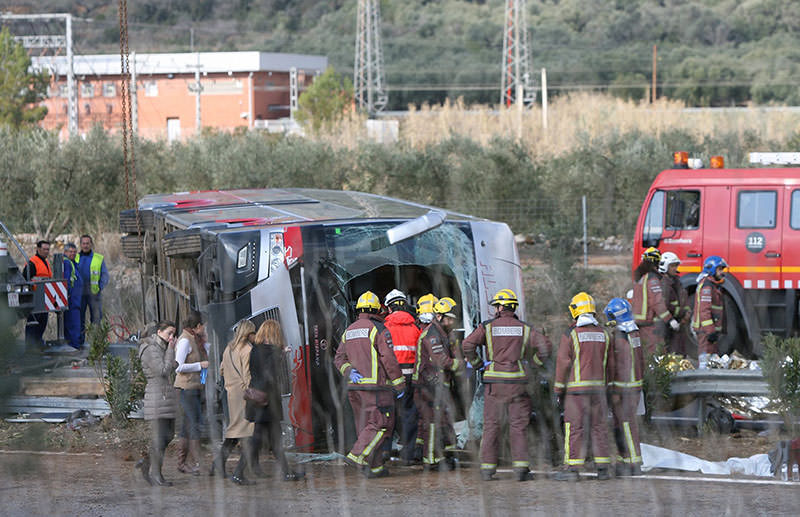 Thirteen people were killed and 43 injured on Sunday when a bus carrying foreign students crashed in northeastern Spain, regional authorities in Catalonia said. According to local reports, Turkish students were among the injured.

The students were enrolled at Barcelona University as part of the European Erasmus exchange programme, said Jordi Jane who heads interior matters for the Catalonia region, adding the nationalities had not yet been established.

El Mundo newspaper however said that the injured included students from the UK, Norway, Switzerland, Turkey and Ukraine – as well as from Barcelona.

The accident occurred just before 6am (0500 GMT) near the small town of Freginals, about 150 kilometres (95 miles) south of Barcelona as the bus was returning from a traditional festival in the eastern city of Valencia.

The driver "hit the railing on the right and swerved to the left so violently that the bus veered onto the other side of the highway," Jane said.

The bus then hit a car coming in the opposite direction, injuring two people inside, he added.

Spanish television showed images of the car, the front of which was smashed in, and the bus lying on its side after the accident.

An AFP photographer at the scene said many fire trucks were on site, as were three hearses and a heavy-lift crane.

The bus was carrying 57 people in all, including the driver. Of the 43 injured, 30 have been rushed to hospital, Jane said.

Spain's national radio station RNE spoke to the son of the owner of the company that chartered the bus, only giving his first name Raul.

His father was driving another bus in front of the one that crashed.

"All of a sudden, he stopped seeing it in his rear-view mirror. He stopped at the next service area, called the driver but he didn't pick up," Raul said.

The son added that his father then asked passengers in his own bus to call those in the other vehicle, and that is when he got news of the accident.

"The driver is in a state of shock, but he's okay physically," he added.

The accident is one of the deadliest in Spain in the past years.

In November 2014, a bus carrying pilgrims fell into a ravine in the southeast, leaving 14 dead and another 41 injured.

Catalonia's newly-elected president Carles Puigdemont was due to travel to Paris Sunday but has cancelled the trip to go to the site of the accident.