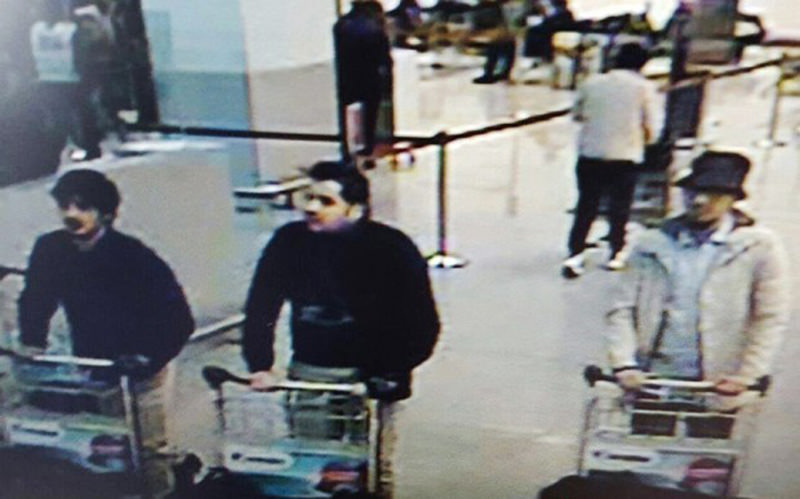 Two suicide bombers who struck Brussels were identified Wednesday as brothers linked to the prime suspect in the November 13 Paris attacks, as a manhunt for a third assailant in Belgium's bloodiest terror assault gained pace.

Belgium's federal prosecutor confirmed on Wednesday that two brothers carried out suicide attacks at Brussels airport and on a metro train that killed 31 people and wounded 270.

Ibrahim El Bakraoui blew himself up in the check-in hall of Zaventem airport while Khalid El Bakraoui attacked a metro train at Maalbeek station near the EU headquarters, Frederic van Leeuw told in a news conference.

A day after the triple blasts that killed some 30 people and left around 250 injured, in an operation claimed by the Daesh terror group, RTBF television said police had identified two suicide attackers as Khalid and Ibrahim El Bakraoui.

Police had already been hunting the pair over their links to Salah Abdeslam, the key suspect in November's Paris terror attacks, who was arrested in Brussels on Friday after four months on the run.

Three days of national mourning have been declared, in a country deeply shocked by the carnage. The population of Brussels was also asked to observe a minute's silence at noon (1100 GMT) Wednesday, led by King Philippe and Prime Minister Charles Michel.

Two suicide blasts hit Brussels' Zaventem airport on Tuesday morning followed soon after by a third on a train at Maalbeek station, close to the European Union's institutions, just as rush-hour commuters were heading to work.

The bloodshed was unprecedented in a city that is home to both NATO and the EU as well as Belgium's capital.

The attacks sent the city into lockdown and European airports scrambled to boost security, amid fresh questions over Europe's ability to combat terrorism little more than four months after the Paris attacks that left 130 dead and 350 wounded.

Brussels' subway was partially running again by Wednesday morning under tight security, with soldiers checking passengers' bags at station entrances. The rush-hour crowds on the platforms were noticeably thinner than usual.

"I'm a bit afraid, especially for my little brothers," said Dominique Salazar, 18, who was taking her siblings, three and six years old, to school.

"But we don't any other choice to get around."

Victims from around the world

The first victim to be identified was Adelma Marina Tapia Ruiz, a Peruvian woman who had been living in Brussels for six years, who died in the airport bombing.

Three Americans, eight French citizens, two Britons, two Colombians and an Ecuadorian are among the injured.

The Daesh terror group claimed the bombings, saying its fighters had carried out the attacks against Belgium -- part of the international coalition that has been carrying out strikes against Daesh in Iraq.

The government had been considering extending the strikes against Daesh targets in Syria, where the terrorists still hold swathes of territory.

Analysts said the attacks pointed to a sophisticated terror network in Europe, and French Prime Minister Manuel Valls said there was an "urgent need" to tighten the EU's external borders following the attacks.

Australia's Prime Minister Malcolm Turnbull said Europe had "allowed security to slip", questioning the wisdom of EU's Schengen passport-free zone, while the US warned citizens about the "potential risks" of travelling in Europe.