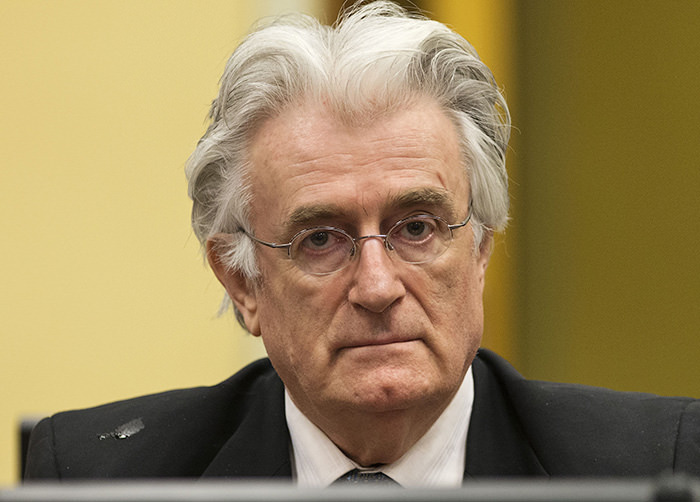 People across Bosnia and Serbia will be anxiously waiting by TVs and radios on Thursday for news from a non-descript courtroom in the Netherlands. After court hearings spanning seven years, the U.N. war crimes tribunal in The Hague, the International Criminal Tribunal for the former Yugoslavia, is set to pass verdict on Radovan Karadzic, the one-time leader of Bosnia's Serbs. His lawyer has said he expects a guilty verdict on an indictment constituted by charges of war crimes and genocide committed against Bosnian Muslims and Croats. The 70-year-old faces a life sentence. "Taking into account all elements of the indictment, which are very precise, I expect that Karadzic gets a minimum of life in prison," Stasa Zajovic, a coordinator of the anti-war group Women in Black told Anadolu Agency. "That would be at least a symbolic satisfaction of justice for the victims, but it would [also] be important for the rehabilitation of the concept and practice of international justice."

Karadzic was president of the self- styled Bosnian Serb Republic and supreme commander of its armed forces between 1992 and 1995, when around 100,000 Bosnians died as the former Yugoslavia descended into ethnic bloodshed. He has been charged with 11 counts of genocide, crimes against humanity and war crimes, including the siege of Sarajevo and the Srebrenica massacre, Europe's worst atrocity since World War II. Jovan Divjak, an ethnic Serb who commanded Bosnian Muslim forces during the conflict, said Karadzic was motivated by personal ambition. "His only aim was first to seize Sarajevo, then all of Bosnia-Herzegovina," the former general told Anadolu Agency. "There are claims that Serb general Ratko Mladic even warned him that it would be genocide. Karadzic acted entirely in accordance with his individual ambitions." Karadzic has blamed Mladic, who was a leading Bosnian Serb commander and who is also on trial for genocide, for the atrocities of the war. Jasmin Meskovic, who heads an association of Bosnian survivors of Serbian concentration camps, said his group expected a punishment which would reflect the systematic nature of Karadzic's alleged crimes. He said more than 30,000 people were killed in 657 camps in Bosnia, including women and children.

However in Karadzic's former mountain stronghold Pale, near Sarajevo, feelings are different towards the former psychiatrist. Days ahead of the verdict, officials named a student accommodation block after Karadzic. Milorad Dodik, the president of Bosnia's Serb entity Republika Srpska, unveiled a plaque with Karadzic's name in front of hundreds of cheering residents. "We dedicate this place to the man who undoubtedly set the foundation of Republika Srpska, the first president, Radovan Karadzic," Dodik told them. Karadzic, who was dubbed the Butcher of Bosnia, was first indicted in July 1995 for the shooting of unarmed civilians in Sarajevo and taking UN peacekeepers hostage. Four months later, he was accused of orchestrating the slaughter of 8,000 Muslim men and boys after Serb forces seized the U.N.'s Srebrenica "safe area" in eastern Bosnia.

He went on the run after the war and was finally arrested on a Belgrade bus in July 2008 using the name of Dragan Dabic.

When he was brought before the tribunal in March 2009, he refused to make a statement and declared his innocence through his lawyer.

During the case, more than 580 witnesses gave testimony of crimes, such as the murder of Muslims and Croats and the destruction of private property and mosques across Bosnia.

Muslims and Croats felt they were cheated of justice against former Yugoslavian President Slobodan Milosevic, when Milosevic died in The Hague in 2006 before judges delivered a verdict in his genocide trial, are now eager for an outcome that will not only satisfy the relatives of tens of thousands of victims, but also turn a page in the country's history.