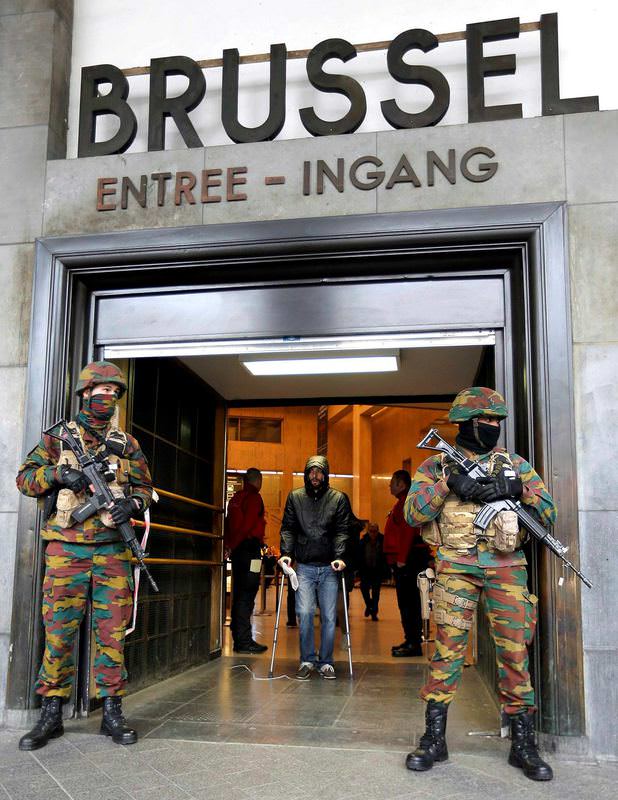 The three bombings that left more than 30 dead have paused life in Belgium as airport, metro stations were closed, revealing the weakness of Belgian security officials who failed to stop the attack despite warnings

Belgian police have identified a prime suspect in Tuesday's Brussels blasts and two suspected suicide bombers, linking them directly to DAESH militants behind last November's Paris attacks, Belgian media reported on Wednesday. Najim Laachraoui, 25, is believed to be the man seen on CCTV pushing a baggage trolley alongside the bombers and then running out of the Brussels airport terminal. Earlier some media reported that he had been captured in the Brussels borough of Anderlecht, but they later said the person detained was not Laachraoui. Police and prosecutors refused immediate comment but the federal prosecutor was due to hold a news conference at 1200 GMT. The death toll in the attacks on the Belgian capital, home to the European Union and NATO, rose to at least 34 with some 260 wounded, Health Minister Maggie De Block said on VRT television. It could rise further because some of the bomb victims at Maelbeek metro station were blown to pieces and victims are hard to identify.

The life in Belgium and Europe has been profoundly affected by the attacks. Thousands of soldiers were deployed in the streets, the airport still remains closed, several tube stations are not open, a friendly soccer match between Belgium and Portugal was called off, people are advised not to go out, several countries including Turkey and Israel warned their citizens to leave the country and not to go.

One of the suspects seen on CCTV pushing baggage trolleys at Brussels airport just before the explosions was identified as Brahim El Bakraoui, public broadcaster RTBF reported. It said his brother, Khalid, blew himself up on the metro train. Both had criminal records for armed robbery but had not previously been linked by investigators to militants. Laachraoui is wanted in connection with the Paris attacks. His DNA was found on at least two explosives belts used in those attacks and at a Brussels hideout used last week by prime Paris suspect Salah Abdeslam, who was arrested last Friday after a shoot-out with police. RTBF said Khalid El Bakraoui had rented under a false name the apartment in the city's Forest borough, where police hunting Abdeslam killed a gunman in a raid last week. He is also believed to have rented a safe house in the southern Belgian city of Charleroi used to mount last November's Paris attacks. DAESH claimed responsibility for Tuesday's attacks, four days after Abdeslam's arrest in Brussels, warning of "black days" for those fighting it in Syria and Iraq.

The attacks sent shockwaves across Europe and around the world, with authorities racing to review security at airports and on public transport, and rekindled debate about European security cooperation and police methods. Prime Minister Charles Michel cancelled a trip to China and convened his inner cabinet to discuss security. Belgium observed a nationwide minute's silence at noon (1100 GMT). King Philippe, the premier and European Commission President Jean-Claude Juncker attended a memorial event at Commission headquarters. More than 1,000 people gathered around an improvised shrine with candles and street paintings outside the Brussels bourse. The Brussels blasts fueled political debate across the globe about how to combat militants.

Police searched an apartment in the northern Brussels borough of Schaerbeek late into the night, finding another bomb, a DAESH flag and bomb-making chemicals. Local media said authorities had followed a tip from a taxi driver who may have driven the bombers to the airport. An unused explosive device was later found at the airport and a man wearing a light-colored jacket and a hat, believed to be Laachraoui, was seen running away from the terminal after the explosions.

Security experts believed the blasts, which killed about 20 people on a metro train running through the area that houses EU institutions, were probably in preparation before Friday's arrest of locally based French national Abdeslam, 26, whom prosecutors accuse of a key role in the Nov. 13 Paris attacks. He was caught and has been speaking to investigators after a shootout at an apartment in the south of the city a week ago, after which another DAESH flag and explosives were found. It was unclear whether he had knowledge of the new attack or whether accomplices may have feared police were closing in.

DAESH said in a statement that "caliphate soldiers, strapped with suicide vests and carrying explosive devices and machineguns" struck Zaventem airport and Maelbeek metro station. It was not clear, however, that the attackers used vests. The suspects were photographed pushing bags on trolleys, and witnesses said many of the airport dead and wounded were hit mostly in the legs, possibly indicating blasts at floor level. The two men in dark clothes wore gloves on their left hands only. One security expert speculated they might have concealed detonators. The man in the hat was not wearing gloves.

Reviving arguments over Belgian policies following the Paris attacks, in which 130 people were killed in an operation apparently organized from Brussels, French Finance Minister Michel Sapin spoke of "naiveté" on the part of "certain leaders" in holding back from security crackdowns on Muslim communities. Belgian Foreign Minister Didier Reynders retorted that each country should look to its own social problems, saying France too had rough high-rise suburbs in which militants had become radicalized.

The Belgian government warned at the weekend that there might be an attack after the security services captured their most wanted man. It came swiftly. One U.S. government official told Reuters that Tuesday's attacks showed Belgian authorities still "have not upped their game". U.S. government sources said that, while the United States and Belgium had believed that another attack after Paris was highly likely, they did not have hard intelligence about where or when such an attack would occur. While Belgian authorities knew that some kind of extremist act was being prepared in Europe, "we never could have imagined something of this scale," Belgian Interior Minister Jan Jambon said. Officials at the airport in the Brussels suburb of Zaventem said police had discovered a Kalashnikov assault rifle and an explosives-packed vest abandoned at the facility, offering one potential lead for forensic evidence. Bomb disposal experts safely dismantled that explosive device. A U.S. administration official said American intelligence officers were working with their European counterparts to try to identify the apparently skilled bomb-maker or makers involved in the Brussels attacks and to identify any links to the bombs used in Paris. Belgium's king and queen said they were "devastated" by the violence, describing the attacks as "odious and cowardly."

Belgian authorities have been accused of neglecting Muslims and failing to help find jobs to shield them from people seeking to radicalize desperate young men. Youth unemployment can reach up to 40 percent in some parts of wealthy Belgium. "Because of the difficulty of fitting into a hostile society, they look for alternative networks where they can blend in," said counter-terrorism expert Rik Coolsaet at the Brussels think-tank Egmont. "Gang activities and the foreign fighters' undertakings are carried out on the margins of the local environment, where they grew up," Coolsaet said. Just a few miles from the power of the headquarters of NATO and the European Union, but effectively a world away, Molenbeek on the poorer side of the city's industrial-era canal has become a notoriously difficult place to track militants. Abdeslam was able to vanish into the streets of Molenbeek, some quarters of which are 80 percent Muslim, for four months, protected by family, friends and petty criminals, not far from his parents' home. Some problems go back to the 1970s, when Belgium, still heavily industrial at the time, sought favor and cheap oil from Saudi Arabia by providing mosques for Gulf-trained preachers.