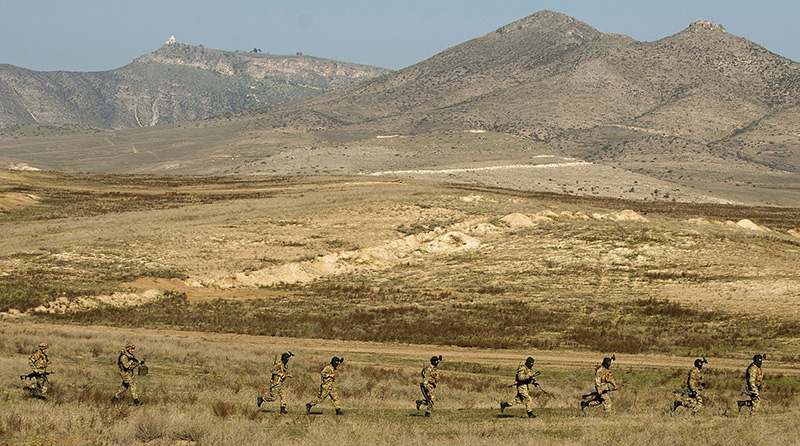 Heavy fighting has broken out between Armenian and Azerbaijani forces along the front lines of the separatist Nagorno-Karabakh region, reportedly killing at least one child in what one official called the worst clashes since 1994, with Russia urging an immediate ceasefire to end the latest surge of violence over the disputed region.

Officials from each former Soviet republic blamed the other Saturday for the fighting that began overnight. Both Armenia and Azerbaijan said they had inflicted heavy losses on the other.

"Twelve Azeri servicemen were killed in action and a Mi-24 helicopter was shot down by Armenian forces," Azerbaijan's defense ministry said in a statement, also claiming that Azeri forces took control of "two strategic heights and a village" in Karabakh. One Azeri tank also went out of service due to land mine explosion. The statement added that six Armenian tanks, 15 artillery positions and supporting engineer positions were destroyed, and thus it is estimated that more than 100 Armenian soldiers were either killed our wounded in action.

Azerbaijan denied an earlier claim that one of its helicopters was brought down. It insisted its forces were counter-attacking after coming under fire from "large-caliber artillery and grenade-launchers" by the Armenian side. "Azerbaijani armed forces have immediately undertaken retaliatory measures against Armenian forces," Azerbaijan's defense ministry said in a statement, adding that "fighting continues in the directions of Agdere-Terter-Agdam and Khojavend-Fizuli."

David Babayan, a spokesman for Nagorno-Karabakh's separatist president, said a boy of about 12 was killed and two other children wounded in a Grad missile barrage by Azerbaijani forces. He characterized the fighting as the worst since 1994, when a war over the territory ended.

The sides are separated by a demilitarized buffer zone, but both claim frequent violations by the other.

Nagorno-Karabakh, a region in Azerbaijan, has been under the control of local ethnic Armenian forces and the Armenian military since 1994. Years of negotiations under the Organization for Security and Cooperation in Europe (OSCE) have brought little progress in resolving the territorial dispute.

Clashes erupted between two former Soviet republics over the control of the disputed region lying inside Azerbaijan's borders as early as 1988. With the dissolution of the Soviet Union, Armenian forces, aided by the weapons vacuum, former Soviet forces fighting as mercenaries on their side and support from locals, captured the former autonomous oblast along with large surrounding areas in its east and south. When the fighting reached to a stalemate in 1994, around one-fifths of Azerbaijan's territory was inavded by Armenian and Karabakh troops and remained under their control ever since. Azerbaijani troops are roughly in control in 20 percent of the territories of the separatist region, which makes up less than half of the occupied territories.

Armenian forces are being accused of committing grave human rights violations against local Azerbaijani population in invaded territories, with the Khojaly Massacre being the most notable.

More than 700,000 Azerbaijanis and 300,000 Armenians were displaced due to the conflict. Many displaced Azerbaijanis continue to live in poverty as the Azeri government refuses to accept the status-quo.

Both sides report numerous casualties, accusing each other on Saturday of violating a ceasefire, a sign that the two-decade-old conflict which has left some 30,000 people dead is far from a peaceful resolution.