Brussels Airport reopened as symbol of returning to normal life 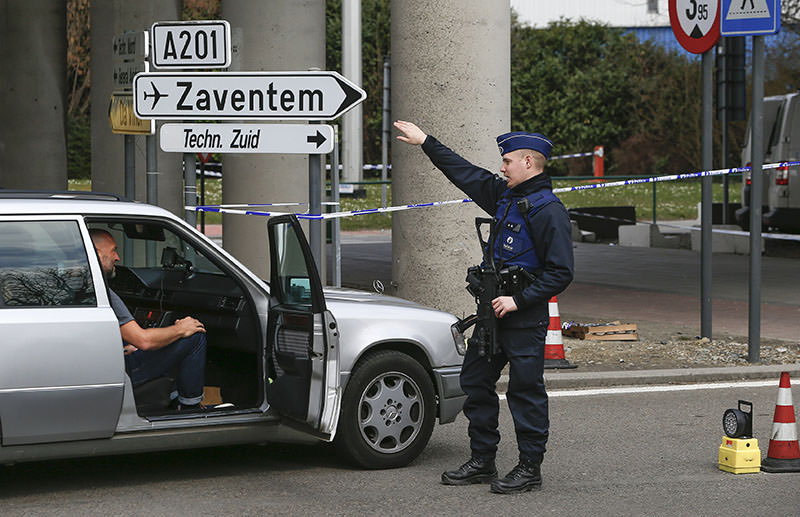 After remaining closed for 12 days after the deadly attack, Brussels Airport was reopened to show that life is returning to normal, although the train and bus facilities are still suspended and Islamophobic attacks are on the rise

Brussels Airport reopened to a thin stream of passengers on Sunday, 12 days after suicide bombers destroyed its departure hall and killed 16 people. Belgium's main airport had not handled passenger flights since two suspected Islamist militants carried out the suicide attacks. Those bombs and a separate one on a metro train in the capital killed 32 people, excluding the three bombers. The first of three scheduled flights set for Sunday was due to depart for Faro in Portugal at 1:40 p.m. local time (1140 GMT), with only about 60-70 passengers. Planes will also go to Turin and Athens later in the day, with three return flights set for the evening. The first passengers for nearly two weeks fed into a vast temporary marquee housing security controls and check-in facilities. Arnaud Feist, the airport's chief executive, said Sunday would be an emotional day for many airport staff, but described the partial reopening as a sign of hope.

On Monday, the airport will serve a far wider range of destinations, including one plane also due out to New York and two more to cities in Cameroon, Gambia and Senegal. Many flights have been rerouted to Belgium's regional airports or other nearby hubs such as Amsterdam and Paris, with high-speed trains to and from Brussels packed. Brussels Airport has warned passengers to arrive three hours before their flights due to increased security and to come by car. The normal train and bus services are not running. Special cameras will be set up to read number plates, there will be random checks of vehicles and the drop-off zone will not be accessible. Passengers and their baggage will be checked on arrival and there will be increased patrols of armed police and military.

The airport is one of the largest in Europe, handling 23.5 million passengers per year. It links the Belgian capital, headquarter city of the European Union and NATO, with 226 destinations worldwide through 77 airlines. With its temporary check-in zone, it will only be able to handle some 800 departing passengers or about five to six flights per hour, around 20 percent of previous capacity. The airport says it aims to return to maximum capacity before the start of summer holidays at the end of June or early July, with some check-in desks restored in the departure hall, followed by a full reopening of that space. Brussels Airlines, Belgium's largest carrier and 45 percent owned by Germany's Lufthansa, has estimated the closure of its Brussels hub is costing it 5 million euros ($5.7 million) per day. The city's association of hotel operators pointed to the closed airport as one of the main reasons for a more than 50 percent drop in overnight stays in the week following the bombings.

Despite the little sign to return to normal life, Belgium has to cope with increasing far-right movements. Belgian police made a series of arrests of right-wing and anti-racist protesters in Brussels on Saturday, and riot squads engaged in a tense confrontation with local youths in the district of Molenbeek. The standoff grew out of plans by a far-right group to hold a demonstration in Molenbeek, a largely Muslim neighbourhood where a number of the militants who staged attacks in Paris had been based. An anti-racist group had called for a counter-demonstration. Both were banned by local authorities, fearful of a repeat of last Sunday's disturbance, when police fired water cannon to break up around 450 rowdy protesters, many of whom local media said were right-wing nationalists. Police said a number of extreme-right protesters nevertheless did arrive in Molenbeek. At least seven were detained. "There was a protest expected by the extreme right, so there a large group of (local) youths gathered and then at a point we had 300 to 400 surrounding the police station," a police spokesman said. Around 200 riot police stood guard in Molenbeek and there was a tense stand-off with the local youths, mostly of North African origin, one of whom hurled a rubbish bin towards the police. Water cannon were in place but were not used.

At one point, Reuters reporters, said a car approached the police line, was hit by police batons and in speeding away, hit a veiled Muslim woman. "The woman was thrown off the car's bonnet and skidded along the road, while the driver continued moving forward and appeared to run over her legs," Daily Mail reported. The fear among Muslims has increased as far-right parties explicitly target ordinary Muslim citizens in their statements.