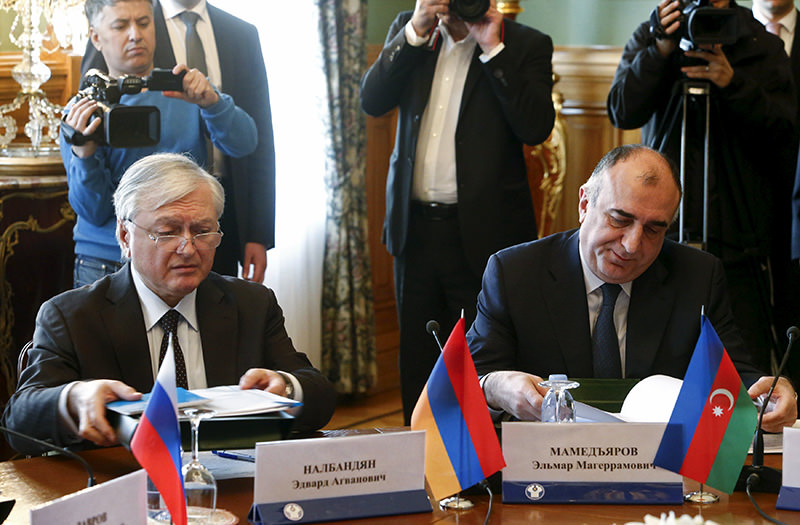 Foreign ministers of Armenia and Azerbaijan, who were in Russian capital Moscow for an international meeting, shook hands prior the start of the meeting on Friday, raising hopes for the termination of armed clashes between two countries and separatist forces in Nagorno-Karabakh that restarted almost a week ago.

Edward Nalbandian of Armenia and Elmar Mammadyarov of Azerbaijan were in Moscow for the Council of Foreign Ministers of the Commonwealth of Independent States (CIS) meeting.

Two countries had earlier declared ceasefire brokered by Russia on Tuesday, however, clashes continued as both sides accused each other of breaching the terms and conducting assaults.

The clashes are likely to be on the table at the meeting, which brings together the foreign ministers of former Soviet republics.

Tensions escalated in Nagorno-Karabakh on March 25, when two parties engaged in the heaviest conflict since the fighting reached to a stalemate in 1994.

An autonomous province within Azerbaijan during the Soviet era, Nagorno-Karabakh and its surrounding territories in its west and south were invaded by Armenian forces, pro-Armenian militia and mercenaries in the course of a six-year-long war. Around 30,000 were killed in the conflict so far, while one million were displaced. With a number reaching 700,000, Azerbaijanis make up most of the displaced since nearly one-fifth of Azerbaijan's territory, twice the size of Nagorno-Karabakh, is under occupation.