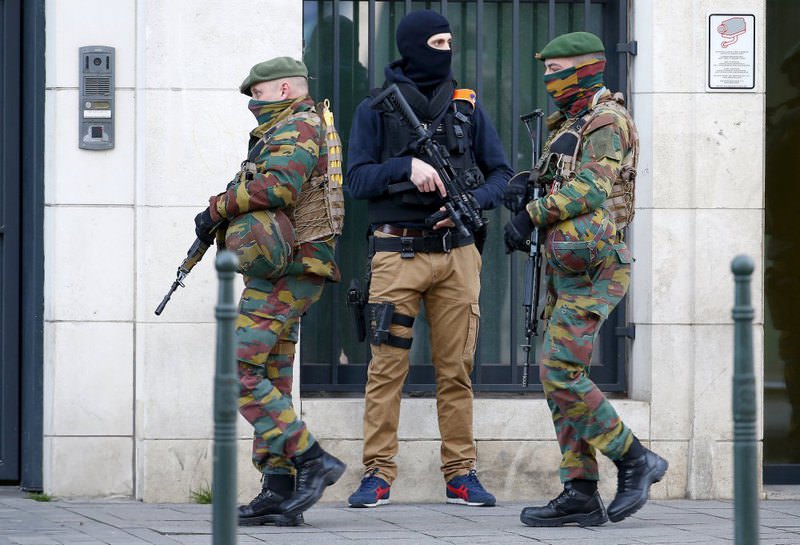 Belgian soldiers and special forces police keep guard outside a courthouse as Paris attacks suspect Salah Abdelslam remains in police custody in Brussels, Belgium on April 7.
by Daily Sabah with AFP Apr 08, 2016 12:00 am

The extradition of Paris attacks suspect Abdeslam to France has been approved by Belgium as the country tries to recover from the extremist attacks. The Belgian prime minister also admitted that the attacks were a security failure, and reports revealed one of the bombers briefly worked at European Parliament several years ago

Belgian authorities Thursday approved the extradition of Paris attacks suspect Salah Abdeslam to France, as officials at the bomb-damaged Brussels Airport said it was ready to reopen although flights would not resume immediately.

Abdeslam, the sole surviving suspect in the November attacks in Paris that killed 130 people, was arrested in Brussels on March 18 after four months on the run as Europe's most wanted man. Four days after he was arrested, the Belgian capital was struck by coordinated DAESH bombings at the airport and a subway station conducted by suicide attackers with links to Abdeslam and the Paris attacks cell.

Abdeslam's lawyer said that his 26-year-old client had agreed to be transferred to France under a European arrest warrant, clearing the way for a fast-track extradition. Abdeslam's arrest was considered a rare success in Belgium's anti-terror fight, although he was found within a short distance of his family home in the Molenbeek district of the capital. He has refused to talk since the Brussels bombings.

The transfer to France should take place "within 10 days," said French Justice Minister Jean-Jacques Urvoas. Belgian investigators will still be allowed to question Abdeslam in France. He is believed to have acted as a logistics coordinator for the Paris attacks and has told investigators he was meant to conduct a suicide bombing at the Stade de France stadium but backed out.

Brussel's Zaventem Airport, closed since its departure hall was wrecked in the attacks, said it had received the go-ahead from fire services and the Belgian Civil Aviation Authority "for a partial restart of passenger flights." "The airport is thus technically ready for a restart," it said in a statement. "However, the authorities have yet to take a formal decision on the restart date. Until Friday evening, no passenger flights will take place at Brussels Airport."

In a bid to end the travel chaos caused by the closure of a major European air hub, hundreds of staff staged drills this week to test temporary check-in facilities as well as enhanced security measures. Under the temporary arrangements, Zaventem Airport would be able to handle 800 departing passengers per hour – around 20 percent of normal capacity, it said.

Close links have emerged between the Paris and Brussels attackers, exposing a tangled web of cross-border extremist cells and triggering a series of raids and arrests in several European countries.

Abdesselam, a Belgian-born French citizen, has connections to at least two of the Brussels bombers. Khalid El Bakraoui, who blew himself up at the subway station, rented an apartment in Brussels where Abdesselam's fingerprints were found. One of the two airport bombers, Najim Lachraoui, drove to Hungary with Abdeslam in September.

Belgium is still searching for a suspected third attacker, the so-called "man in the hat" seen in surveillance images alongside the two airport bombers.

Belgian PM says Brussels attacks a failureMeanwhile, DAESH attacks in Brussels represented a security "failure," Belgian Prime Minister Charles Michel admitted Wednesday, but he rejected the notion his country was a "failed state." Belgian authorities have faced strong criticism at home and abroad for not doing more to prevent the March 22 carnage after clear links emerged between the Brussels attackers and the extremists behind the Paris terror assaults in November. "When there is an attack like that, of course that's a failure and nobody can deny this," Michel told reporters in Brussels. But "I cannot accept the idea that we're a failed state." Belgian authorities face serious questions about possible lapses in security in the wake of terrorist attacks in Brussels, as reports surfaced indicating that Turkey had warned Belgium about one of the attackers and two additional suspects are on the United States terror watch list. President Recep Tayyip Erdoğan on April 1 lashed out at European leaders who missed opportunities to prevent terror attacks even though Turkey had previously notified the Belgian authorities and deported one of the Brussels terrorists. Two Belgian ministers offered to step down over the Turkey accusation, but Michel refused their resignations.
RELATED TOPICS