Italy recalls ambassador to Cairo in protest over student's murder 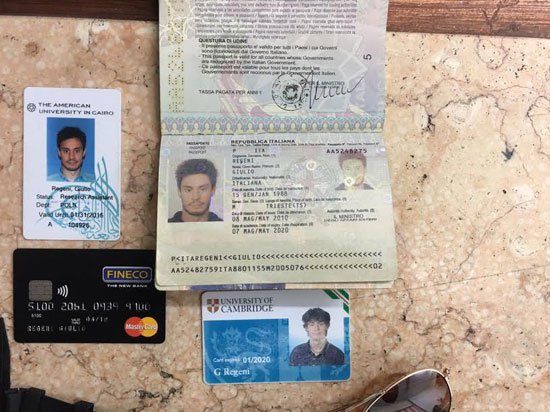 In this photo released by the Egyptian Ministry of Interior on Thursday, Mar. 24, 2016, personal belongings of slain Italian graduate student Giulio Regeni. (AP Photo)
by Apr 08, 2016 12:00 am

Italy recalled its ambassador to Egypt for consultations on Friday after Egyptian investigators in Rome failed to provide evidence needed to solve the mystery of the murder of an Italian student in Cairo.

Ambassador Maurizio Massari was called to the capital for "an urgent evaluation" of what steps to take to "ascertain the truth about the barbaric murder of Giulio Regeni", the Foreign Ministry said in a statement.

Regeni, 28, vanished from the streets of Cairo on Jan. 25. His body was discovered in a ditch on the outskirts of the Egyptian capital on Feb. 3, showing signs of extensive torture.

Regeni's mother said last week that her son's body had been so disfigured that she had only been able to recognise him by the tip of his nose.

Human rights groups have said the torture indicates he was killed by Egyptian security forces, an allegation Cairo has repeatedly denied.

Italy's move to escalate the diplomatic dispute is likely to further strain relations between the two countries.

"Italy will stop only when it has the truth," Renzi said on Facebook after the ambassador was recalled.

Italian officials have openly ridiculed different versions of Regeni's death put forward by Egyptian investigators, including an initial suggestion that he had died in a traffic accident.

After the meetings in Rome, Italian prosecutors said the Egyptians had still not handed over key evidence, according to a statement.

Italian prosecutors were suspending their collaboration with their Egyptian counterparts and were "disappointed" by the outcome of the meetings, judicial sources told Reuters.