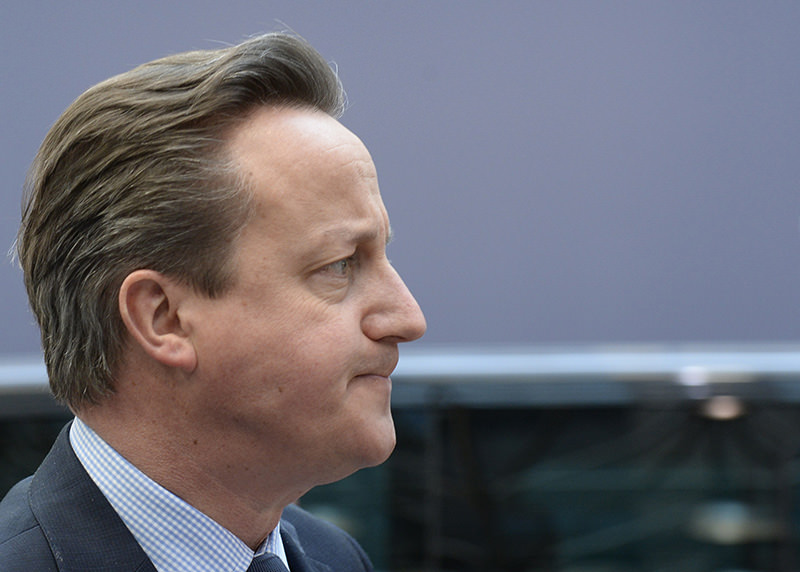 Britain's Prime minister David Cameron (AFP Photo)
by Compiled from Wire Services Apr 09, 2016 12:00 am
British Prime Minister David Cameron said on Saturday he should have handled scrutiny of his family's tax arrangements better and promised to learn the lessons after days of negative media coverage and calls for his resignation.

After four days and four different statements over his late father's inclusion in the "Panama Papers", Cameron said on Thursday he once had a stake in his father's offshore trust and had profited from it, spurring calls for the leader to resign.

Cameron faced mounting pressure Friday over his involvement in offshore investments after he finally admitted he benefited from his father's Panama-registered trust, an entity exposed by this week's massive data leak at a law firm specializing in global tax avoidance.

Lawmakers from opposition parties demanded that Cameron tell the House of Commons whether he holds, or held, other similar investments in trusts beyond the reach of the British tax system.

The issue which has ensnared scores of leaders, stars and others since Sunday's unprecedented leak of 11.5 million documents from clients of law firm Mossack Fonseca is causing particular damage to Cameron, who for years has campaigned prominently for a crackdown on global tax avoidance.

After three days of obfuscating statements, Cameron admitted Thursday night he had sold more than 30,000 pounds (about $48,450 at the time) in shares in his late father's Blairmore Holdings, an investment vehicle that Mossack Fonseca helped organize in the Bahamas. Cameron said he bought the shares in 1997, the year his Conservative Party was ousted from power, and sold them in 2010 shortly before his party returned to office with him in the top post.

Tom Watson, deputy leader of Britain's opposition Labour Party, said nobody believed this was Cameron's only involvement in profiting from offshore investments. He and many other lawmakers called on Cameron to publish not merely his recent annual tax returns something Cameron has pledged to do but also details of his investment portfolio since 2005, when he became Conservative Party leader.

"This is the man who is making the rules and living his life to a different set of rules," said Watson, who recalled Cameron's 2013 speech denouncing offshore tax evasion. "He heralded the new age of transparency. He said sunlight is the best disinfectant. Why doesn't he just step out of the shadows, into the sunlight, and reveal his investment portfolio since 2005?"

Opposition leaders called on Cameron to address their demands with a Monday statement to Parliament.

Cameron has declined to give other interviews on the matter since his Thursday night statement to ITV News. But party colleagues leapt to his defense Friday, arguing that their leader simply had wanted to shield his father from unfair criticism. Ian Cameron, a stockbroker, died in September 2010 leaving savings valued at 2.75 million pounds ($4.28 million at the time), much of it in offshore investments.

"I don't think it's fair to accuse him of hypocrisy," said Nick Boles, minister of state for skills in Cameron's government. "What he didn't want to do was effectively invite people in to rake through his father's past. His father isn't around to defend himself."

Rich and influential people worldwide have found themselves under siege since the massive breach of data security at the previously little-known Panama firm of Mossack Fonseca.

The uproar has brought down the prime minister of Iceland and raised questions about the presidents of Argentina and Ukraine, senior Chinese politicians, and the circle of friends of Russian President Vladimir Putin.

The Organization for Economic Cooperation and Development, which represents 34 of the world's most developed countries, is convening a meeting of tax officials in Paris on April 13 to discuss what action to take.

The OECD said Friday that they will "explore possibilities of cooperation and information-sharing, identify tax compliance risks and agree (on) collaborative action in light of the Panama Papers revelations."

The organization has already formed a network of tax officials from around the world who have pledged to work with each other to crack down on tax evasion.

Pierre Moscovici, who oversees financial affairs for the 28-nation European Union, this week threatened to impose sanctions on Panama, as well as other nations facilitating tax avoidance, if they don't cooperate fully to fight money laundering and tax evasion. Panama is listed by the EU as a country that is not cooperative on tax issues.

Several national and regional authorities such as in Switzerland, France, Australia and the African Union group have opened investigations into individuals or companies linked to the leaks.

Panamanian President Juan Carlos Varela has said his government will cooperate more and announced plans for an international committee of experts to recommend ways to boost transparency. But he also vowed to defend his country against what he says are media attacks that unfairly stigmatize Panama.

Ramon Fonseca, co-founder of the Panama firm, said his firm creates about 20,000 shell companies annually but also rejects about 70 to 80 clients every year due to conflicts that arise during due diligence.

"We're not perfect and some surely escape by," Fonseca told the AP. "But so far the only crime that has been proven is the hack."

El Salvador's head prosecutor said officials decided to act after hearing that the company's sign was being taken down from the offices Thursday night. Douglas Melendez said prosecutors found "few documents" during the raid in an upscale neighborhood in San Salvador.

Melendez said "we have found a lot of computers and servers," and about a half-dozen employees, who are being questioned.

Melendez said authorities have had the building under surveillance and don't think any documents had been removed.

But he added "we are going to raid neighboring offices because we have information there are more documents or computers. We are going to seize everything, computers or documents, that we find."

Authorities did not disclose the names of Salvadorans suspected of having dealings with the firm.