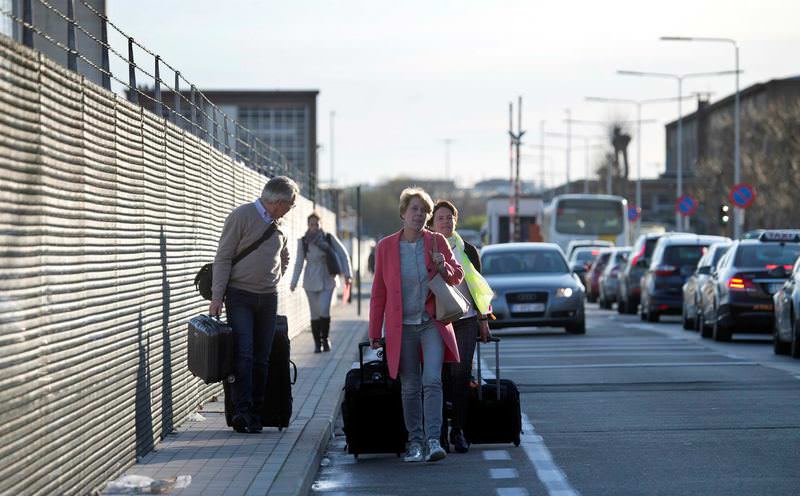 Passengers walk with their luggage on the main road from Zaventem Airport since their flights were canceled.
by Compiled from Wire Services Apr 14, 2016 12:00 am

As many as 100 flights, one-in-eight, were canceled at the Brussels airport due to laborers striking to condemn the terrorist attacks. Passengers had to wait for more than a day to continue their travels

Brussels airport cancelled around 50 flights on Wednesday due to a second day of industrial action by air traffic controllers, the Belga news agency reported. The strike comes as the airport has sought to recover from suicide bombings last month in which two attackers blew themselves up in the departure hall. Together with a third blast at a Brussels underground station, 32 people were killed. Belgium's main international aviation hub was closed for several days, and services have yet to return to normal. The airport should have been handling around 400 flights Wednesday, according to Belga. "Much effort has been invested to resume activities and win back the confidence of foreign aviation companies," Belgian Employment Minister Kris Peeters said Wednesday, Belga reported. "The current actions are seriously complicating this new beginning." The airport's website carried an advisory Wednesday telling passengers to check the status of their flight before setting off. Roughly 100 flights were cancelled Tuesday due to the strike, and seven were diverted abroad, Belga reported. Labor leaders had asked staff to call in sick on Tuesday due to disagreements over a proposed dispute settlement, including a rise in the minimum retirement age. A spokesman for air traffic authority Belgocontrol said some workers had again called in sick on Wednesday but capacity was increased to 20 landings or take-offs per hour from 15 earlier in the day. "We'll go to 25 later in the day," the spokesman said.

The industrial action began hours after the airport settled a dispute with air traffic control representatives, reaching a compromise deal under which employees will gradually see their working age extended. The agreement "does not satisfy the guild of air controllers," aviation operator Belgocontrol said in a statement Tuesday, adding that staff members were claiming to be ill and unable to work. The decision to go on strike so soon after the terrorist attacks drew criticism at home and abroad. On Tuesday, the International Air Transport Association (IATA) had condemned the action as a "kick in the teeth" for all those who had worked to get the airport up and running again. "It is the height of irresponsibility to cut a vital service, and doing so without warning can only be seen as malicious," IATA chief executive Tony Tyler said in a statement.

Meanwhile, air traffic has almost stopped at Amsterdam's Schiphol Airport. Heavily armed military police sealed off part of the airport for hours Tuesday night after arresting a man for unspecified suspicious behavior and summoning explosives experts to check his luggage. Police in body armor and ski masks brandishing machine guns patrolled the airport for four hours while the investigation was under way, stranding scores of passengers who could not get to their parked cars because parts of the airport were sealed off. Flights at the busy aviation hub appeared largely unaffected by the security scare and trains to the airport's station continued running throughout the security scare. In the early hours of Wednesday, military police spokesman Alfred Ellwanger told The Associated Press in a telephone interview that "no dangerous materials were found" in the arrested suspect's luggage and the tight security measures were lifted. Ellwanger said the man who was arrested remained in custody and under investigation. He had no details on the man's identity. He said the arrest followed "a report of a suspicious situation," but didn't elaborate. The Netherlands has been on high alert since the deadly suicide bombing attacks on Brussels airport and subway last month in neighboring Belgium.
RELATED TOPICS