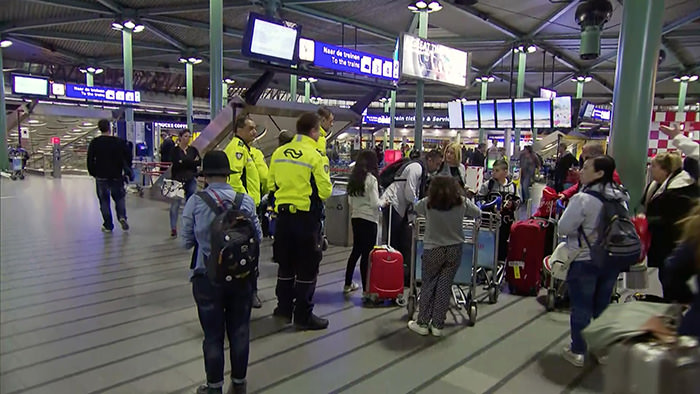 This image made from a video from RTL shows passengers waiting at Schiphol Airport in Amsterdam, Tuesday, April 12, 2016 (AP Photo)
by Associated Press Apr 14, 2016 12:00 am
European Union lawmakers on Thursday approved a scheme to share airline passenger information that can be used to track foreign fighters heading to and from conflict areas like Syria and Iraq.

They endorsed the Passenger Name Record law in a series of votes at its legislature in Strasbourg, France, ending years of wrangling over how to balance security needs and privacy rights.

Under the scheme, traveler details will be collected from flights entering or leaving the EU and from flights between member countries. The information will be kept for six months.

"This is an important tool in the fight against terror," said Ivo Belet, a member of parliament for the EPP Christian Democrat group, the biggest in the legislature.

At least 5,000 Europeans are believed to have trained or fought in Syria and Iraq but authorities are struggling to track their movements and prove their activities.

The EU already has passenger data deals with the U.S., Canada and Australia.

The need for the legislation following years of foot-dragging became ever more pressing in the wake of the Nov. 13 attacks in Paris that killed 130 and last month's suicide bombings in Brussels, which left 32 dead.

Interior Minister Bernard Cazeneuve said it would "enhance the security of EU citizens by allowing upstream tracking of jihadist terrorist movements." He added that it "will also be a step forward in the sharing of information between police forces and European intelligence, one of the crucial requirements to enhance our protection against a new and mobile terrorist threat."

Thursday's vote brought to an end a process that began eight years ago, delays that often drew public outcries as fears grew of extremist violence in Europe.