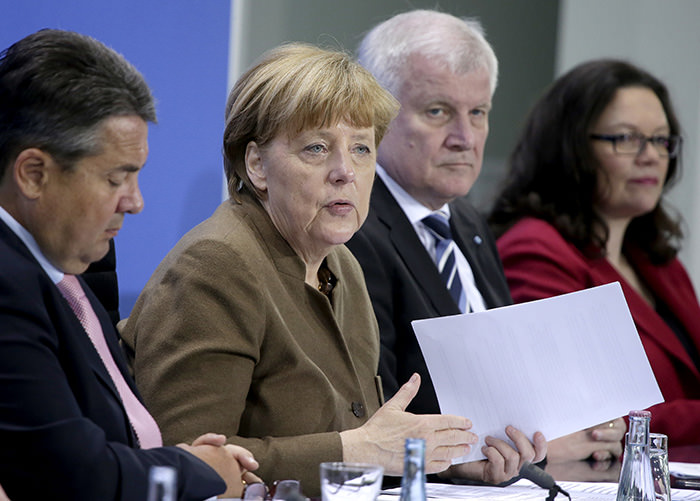 German Chancellor Angela Merkel's ruling coalition agreed on Thursday on sweeping measures to spur the integration of migrants and refugees in a "historic" first for a country that long resisted embracing immigration.

The integration bill would take a carrot-and-stick approach, providing subsidized courses to help newcomers find their way in German life but, in some cases, denying residence permits to those who fail to take up the offer.

Germany took in more than 1 million asylum seekers in 2015 and Merkel has faced virulent criticism from skeptics, particularly from within her conservative camp, who argue that Europe's top economy is ill-equipped to cope with the influx.

Vice Chancellor Sigmar Gabriel of the SPD called the agreement a "historic step" towards acknowledging the "modernization and opening of our society" and said he hoped it would lead to a broader immigration bill long resisted by conservatives.

In recent years, Berlin has looked to immigration as a viable solution to the country's demographic time-bomb, with a dramatically shrinking native population expected to pose serious problems for Europe's top economy.

The government's show of unity Thursday was intended to end months of infighting and breathe life into Merkel's "We can do it" mantra during the refugee crisis, which she has repeatedly said can also represent an opportunity for Germany.

Meanwhile, the closure of the so-called Balkan route taken by many migrants has led to a sharp decline in new arrivals in recent weeks, alleviating some of the political pressure on Merkel.

Refugees who abandon state-assigned housing would face unspecified consequences, but waiting periods for acceptance courses teaching the German language and customs are to be slashed to six weeks from three months currently. "An offer for everyone but also requirements for everyone who arrives here - the goal is to integrate as many people as possible into the labor market," Merkel said. "Only those refugees who work toward their own integration will receive a permanent residence permit." The right-left coalition also agreed to give more funding, personnel and powers to security forces to combat terrorism.

A significant new provision would allow federal police to deploy undercover officers for attack prevention as well as criminal prosecution. It would also allow the secret services to step up cooperation with their counterparts from partner states in Europe and NATO as well as Israel.

Meanwhile, as many as 1 million people may cross over from Libya to Italy in the latest wave of migration into Europe, a military adviser working for the United Nations said Wednesday.

Last year, most Europe-bound migrants passed through the Balkans route connecting Turkey to Germany, but since borders there have been shut, the Libya-Italy sea route may become the preferred entry channel once again. "In Libya, there are a million potential migrants," General Paolo Serra, a military adviser for U.N. Libya envoy Martin Kobler, told a committee at the Italian parliament, according to the ANSA news agency.
Last Update: Apr 14, 2016 4:52 pm
RELATED TOPICS