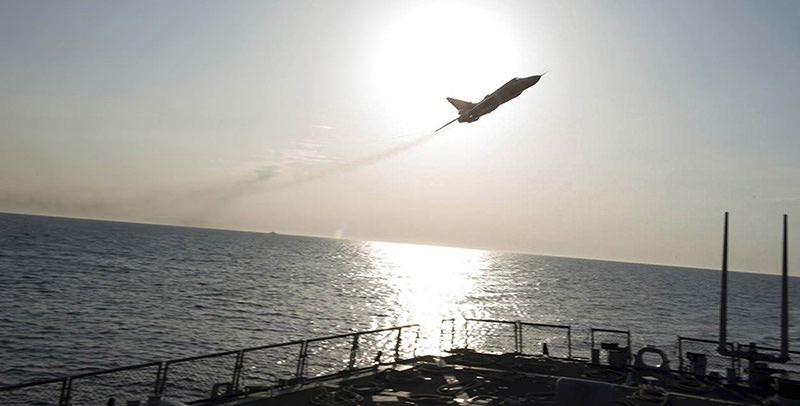 An U.S. Navy picture shows what appears to be a Russian Sukhoi SU-24 attack aircraft flying over the U.S. guided missile destroyer USS Donald Cook in the Baltic Sea in this picture taken April 12, 2016 (Reuters Photo)
by German Press Agency - DPA
Apr 14, 2016 12:00 am
Low-altitude passes made by Russian fighter jets this week over a US military ship in the Baltic Sea were "unsafe and unprofessional," NATO chief Jens Stoltenberg says.

"This kind of behaviour is unsafe, and unprofessional. And that's the reason why I have, for a long time now, underlined the importance of more transparency, more predictability and increased efforts on risk reductions," he told journalists during a visit to London.

"We have seen substantial, significant increases in military activity along our borders. And we have to avoid incidents, and accidents, and if they happen, we have to make sure they don't spiral out of control," he added.

Stoltenberg said the issue of transparency on military activities and risk reduction will be addressed during a meeting between NATO ambassadors and their Russian counterpart on April 20 - the first that will be held in nearly two years.
Last Update: Apr 14, 2016 11:04 pm