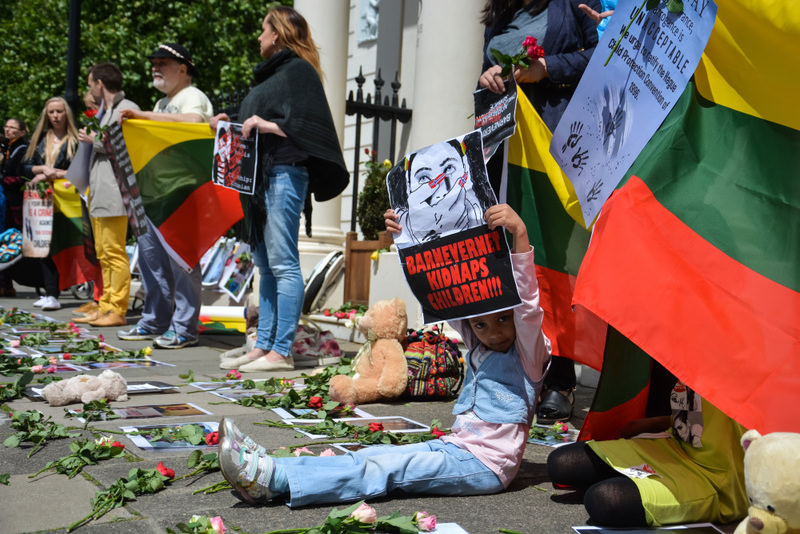 Many parents lose their children to the Barnevernet in Norway due to baseless accusations, which also affected Turkish citizens. While the situation causes uproar worldwide, authorities' motives remain unclear. Norwegian human rights attorney Reikaras has asked PM Davutoğlu to help a Turkish citizen with this issue

Norwegian human rights attorney Marius Reikaras recently wrote a letter to Prime Minister Ahmet Davutoğlu in which he tried to draw attention to the "horror" that many families, including Turkish citizens, face in Norway.

According to Reikaras, a Turkish citizen who wanted to remain anonymous fled to Turkey in August 2014 with two of her children, afraid they would be taken away by Child Protection Services (CPS).

"I would like to take this opportunity to address some serious human rights violations that are happening to Turkish nationals living in Norway," Reikaras says, adding that a woman, to whom he referred to as xxxx for fear of the Norwegian state, was forced to flee Norway in August 2014.

Explaining that she cannot return to Norway "due to fear that the Child Protection Services (CPS) in Norway would take her two sons and put them into public custody," Reikaras says xxxx is not the only person suffering.

"She knows, and I know several families who are in the same situation as her," says Reikaras, adding that xxxx has a husband and two sons living in Norway, who the CPS cannot take away from her because they are adults.

Reikaras also offered to provide more precise information should the Turkish government take interest in the matter. "I would be very happy to inform your government more precisely about the horror facing so many families in Norway."

Fuat Uğur, a presenter for ATV Avrupa news show Avrupa'da Gündem (Agenda in Europe) and a columnist for the Türkiye daily, brought up the issue in his column on Thursday, in which he shared Reikaras' letter.

Speaking to Daily Sabah, Uğur said Reikaras contacted him. "After I researched the issue in Norway, stories piled up rapidly," he said, adding that Norway comes third after Germany and the Netherlands regarding officials taking children from their parents.

Uğur expressed shock at the scale. "Nearly 60,000 children have been taken under the custody of children protection services. This is almost one-tenth of all children in the country. I saw unbelievable videos in which police officers take away the children from their bosom."

Adding that he hosted Norwegians on his TV show, Uğur said Norway is "a ferocious country. Children are officially kidnapped."

Many children in Norway live in fear of being taken away from their families if their parents break any number of CPS authority rules. Complaints have been as trivial as "Mother slices bread too thin," and "too much soap is used for cleaning in the house."

Complaints do not have to be serious or involve abuse to justify taking children away, instances of these have included "changing homes twice in three years can negatively influence a child," and "mother takes care of her daughter properly, but cannot pay the same attention to her son."

The Norwegian state pays 2.5 million krone ($303,000) to the Child Welfare Services of Norway (Barnevernet) for every child taken away from their families. Officials responsible for the process are also well-paid, receiving around 150,000 krone for each child.

Incidents of violence and sexual abuse by foster parents who adopt children are also often reported.

In a BBC article posted on Thursday, a couple said that their five children were taken away by the Barnevernet for varied reasons.

The treatment of children and the agony of their parents has drawn worldwide attention. Thousands of people have protested the institution for its wrongdoings.

Immigrant families seem to feel the pressure most. According to information in an article published in The Scotsman, "of 6,737 children taken in 2012 – the latest available data – some 1,049 were immigrants or born to immigrant parents. That compares to 744 children of immigrants taken away, of a total of 5,846, in 2009."

Parents instructed on how to deal with Barnevernet

As parents live in fear that the Barnevernet may take away their children any day, experts and attorneys instruct them on how to deal with meetings with Barnevernet officials.Parents are instructed to behave in decently and not get angry when dismissing the allegations that authorities throw at them.

"Do not raise your voice. Try to be humble," is how parents are instructed to handle these meetings.

If parents utter a single sentence which Barnevernet officials deem to be inappropriate, they may lose their beloved children.
RELATED TOPICS