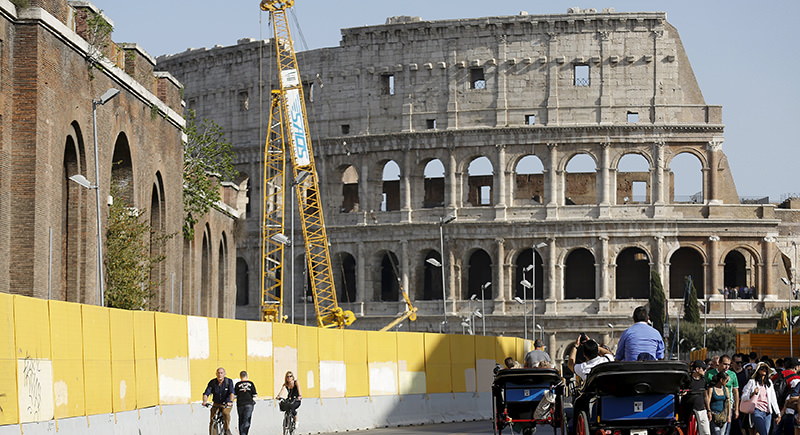 Horse-drawn carriages pass next to a barriers of ,Roma Metropolitane, (Rome's underground) at the Colosseum in Rome, Italy, April 4, 2016 (Reuters Photo)
by Apr 15, 2016 12:00 am
Rome's landmark Colosseum is gleaming after a three-year external makeover funded by an Italian luxury goods company. But not all are happy that the upkeep of the historic building is being outsourced to private business in return for commercial exploitation rights.

Italy's most famous monument, the Colosseum, will look "almost" as it did 2,000 years ago upon next week's completion of the first stage of a 25-million-euro (28-million-dollar) makeover project.

The travertine surfaces of the open air stadium, where gladiators once fought lions, had been blackened by decades of home heating and traffic smog.

Over the last three years, the limestone has been gradually returned to its glorious white, using water sprays and gentle brushing.

"This facade is now almost the same as it was in ancient times," Colosseum Director Rossella Rea tells dpa, as she stands outside the northern side of the monument - the best preserved - amid a throng of tourists, ticket touts and workmen.

The archeologist said outside clean-up works, which cost 6.5 million euros, will be over on April 22 - a day after Rome celebrates the 2,769 anniversary of its foundation. As Rea was speaking, the last pieces of scaffolding were being taken down.

Time has robbed the monument of adornments such as decorative statues and metal shields - which, bouncing off sun beams, acted as luminous signposts for the Colosseum. An indelible patina is left on the stones in their place, but otherwise the Colosseum is in pretty good nick, Rea said.

The clean-up has revealed new details of the monument, including the numbers marking its stands and signs of 3rd century AD repairs made to the upper levels of the Colosseum following a great fire, the director said.

Built between 70 and 80 AD, the amphitheatre was used by ancient Roman emperors as a venue for public executions and bloody spectator sports, such as gladiatorial battles and wild animal fights, in front of crowds of up to 50,000 people.

It fell into disuse with the fall of the Roman Empire and was partly dismantled at the southern end in the 6th century AD, following extensive earthquake damage. This is the reason for its distinctive appearance today as an incomplete arena.

Along with the nearby Roman Forum, the Colosseum is Italy's most popular tourist site, attracting more than 6.5 million visitors last year and raising 50 million euros in ticket sales.

The facade was cleaned in small installments, to allow the monument to remain open throughout the works. In the next stages, restorers will work on underground passages and inside corridors, and there are also plans to build a new ticket office and bookstore.

Attempts so far to spruce up the area have produced mixed results. The avenue cutting across the Forum has been pedestrianized, and fake gladiators and ugly street food vans have been banished; but the area still looks messy, partly due to metro building works.

The Colosseum project was funded by luxury goods maker Tod's, in what is Italy's biggest private sponsorship deal for art. Other notable examples include the 2.2-million-euro restoration of the Trevi Fountain, completed in November thanks to fashion house Fendi.

Culture Minister Dario Franceschini has been keen to raise money in this way, but some academics have denounced the practice as a cynical sell-out by Italy's cash-strapped government, opening the door to the commercial exploitation of national heritage sites.

Art historian Tomaso Montanari told dpa that Tod's boss Diego Della Valle was granted extensive marketing rights over the Colosseum in return for his generosity, but following a public outcry over the deal, he has chosen to forgo using them entirely.

Rea confirmed this indirectly, describing Della Valle as "really enlightened" and "very discreet," and saying that, "as long as all entrepreneurs are like him," she was happy to see more private sponsorship deals.

Montanari insisted that patronage - which grants no economic benefits to donors - was the only acceptable form of private financing for public art, and said this was far more common in France and the United States.

"It's wrong to transform monuments into marketing tools," Montanari said. "We are already treated as clients or consumers for 90 per cent of our lives. There should be places - like schools and other cultural sites - where we are free from market forces."
Last Update: Apr 15, 2016 4:00 pm
RELATED TOPICS