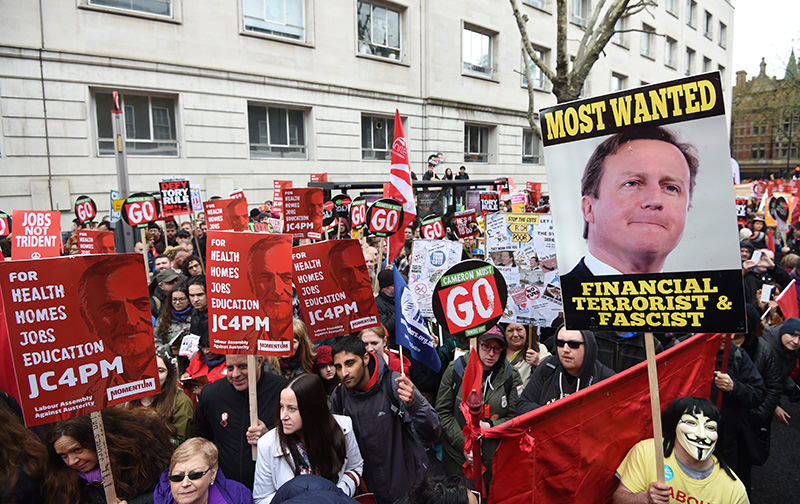 by Compiled from Wire Services Apr 16, 2016 12:00 am
An estimated 150,000 people gathered in central London on Saturday in a protest against the Conservative government's cuts to social welfare and public institutions, the Press Association reported.

Many of the protesters at the event, End Austerity Now, were calling for Prime Minister David Cameron to resign.

The event was organized by the People's Assembly, whose demands include an end to the privatization of public assets, better protection for workers on nonpermanent contracts and increased investment in education.

The protest, which also included demands to protect Britain's troubled steel industry, was planned long before Cameron's admission last week that he once held shares in his late father's offshore investment fund.

But The People's Assembly, which helped organise the trade union-backed march, said the revelations sparked by the so-called Panama Papers "prove that this is a government for the privileged few".

Cameron took the unprecedented step of releasing a summary of his tax returns for the past six years, but a new poll published late Saturday found 52 percent of voters believe he has not been "honest and open" about his finances.

A further 44 percent said his handling of his financial affairs was "morally repugnant", according to the ComRes survey for the Independent and the Sunday Mirror newspaper.

"For somebody in that position, you have a duty of care to the people of the country to be very open, very transparent," demonstrator Sarah Henney told AFP.

"Just because something is legal doesn't always make it right."

Opposition Labour finance spokesman John McDonnell was among a number of political figures who addressed the protesters, and he called for an end to the spending cuts introduced after the global financial crisis.

He later told the Press Association news agency: "I think Cameron should go, but I think he should take his party with him.

Cameron, who was re-elected last year with a parliamentary majority, said he sold his shares in his late father's offshore investment fund before taking office, and denied the fund had been established to avoid tax.

But the row put the premier under pressure at a difficult time, as he seeks to manage an increasingly bitter fight within his Conservative party over the upcoming referendum on EU membership.

Some 128 of the 330 Conservative lawmakers in parliament and several of Cameron's own ministers are campaigning against him in favour of leaving the European Union ahead of the June 23 vote.

Veteran Tory MP Ken Clarke warned Saturday that if Cameron loses the referendum, he will be forced out of office.