Pope meet Patriarch in Lesbos to stand with migrants, call on world to share the burden of refugees 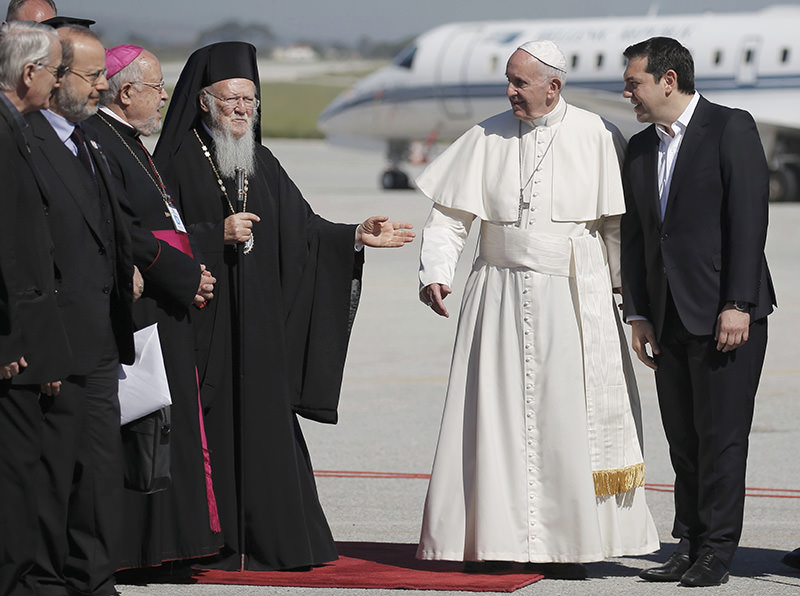 The pope and the leaders of the world's Orthodox Christians and the Church of Greece have signed a joint declaration calling on the international community to make the protection of human lives a priority and to extend temporary asylum to those in need.

Pope Francis, Greek Orthodox Patriarch Bartholomew I and Archbishop Ieronymos II signed the joint declaration Saturday during an emotional and highly political visit to the Moria migrant detention center on the Greek island of Lesbos.

The declaration also called on political leaders "to employ every means to ensure that individuals and communities, including Christians, remain in their homelands and enjoy the fundamental right to live in peace and security."

It said the three religious leaders' meeting was "meant to help bring courage and hope to those seeking refuge and to all those who welcome and assist them."

Lesbos has seen hundreds of thousands of people reach its shores trying to get to Europe.

The pope visited the island of Lesbos alongside Patriarch Bartholomew I and Archbishop Ieronymos II to highlight the plight of refugees, thank the Greek people who have welcomed them in, and to show a united Christian response to the humanitarian crisis unfolding.

The visit came as the European Union was implementing a controversial plan to deport refugees back to Turkey.

Greek state television ERT reported that Francis would take 10 refugees — eight Syrians and two Afghans — back with him when he leaves. Asked about the report, the Vatican spokesman, the Rev. Federico Lombardi told The Associated Press: "I have nothing to say at this time."

Asked if he would have an update later, Lombardi said: "Each moment has its significance."

The Vatican is already hosting two refugee families, so the gesture would be in keeping with Francis' call for Europe to open its hearts and borders to those most in need.

Many refugees fell to their knees and wept at Francis' feet as he and the two senior Orthodox leaders approached them at the Moria detention center on the Greek island of Lesbos. Others chanted "Freedom! Freedom!" as they passed by. Francis bent down as one young girl knelt at his feet sobbing uncontrollably. A woman told the pope that her husband was in Germany, but that she was stuck with her two sons in Lesbos.
In his remarks to them, Francis urged the refugees to know that they are not alone and shouldn't lose hope. He said he wanted to visit them to hear their stories and to bring the world's attention to their plight.

"We hope that the world will heed these scenes of tragic and indeed desperate need, and respond in a way worthy of our common humanity," he said.

Earlier in the day, the pope tweeted: "Refugees are not numbers, they are people who have faces, names stories and need to be treated as such."
The spiritual leader of the world's Orthodox Christians has told migrants in a detention center on the Greek island of Lesbos that the world will be judged by how it has treated them.

Patriarch Bartholomew I also condemned the "hard-heartedness" that saw borders closed to the migrants.

He praised the "sympathy and sensitivity" of Greek island residents who welcomed the refugees, but stressed migration isn't an issue for "the Middle East and Northern Africa, for Europe and Greece. It is an issue for the world."

"The world will be judged by the way it has treated you. And we will all be accountable for the way we respond to the crisis and conflict in the regions that you come from," he said.

Francis' Alitalia charter touched down at the airport in Lesbos shortly after 10 a.m. Saturday.

Greek Prime Minister Alexis Tsipras met him on the tarmac and Francis thanked him for the "generosity" shown by the Greek people in welcoming foreigners despite their own economic troubles, the Vatican said.

Tsipras, for his part, said he was proud of Greece's response "at a time when some of our partners — even in the name of Christian Europe — were erecting walls and fences to prevent defenseless people from seeking a better life."

Francis and the two Orthodox leaders, officially divided from Catholics over a 1,000-year schism, then traveled to the main detention center on Lesbos to greet some 250 refugees stuck there.

They lunched with eight refugees to hear their stories of fleeing war, conflict and poverty and their hopes for a better life in Europe. Later they were expected to pray together, tossing a floral wreath into the sea in memory of those who didn't make the journey.

The son of Italian immigrants to Argentina, Francis has made the plight of refugees, the poor and downtrodden the focus of his ministry as pope, denouncing the "globalization of indifference" that the world shows the less fortunate.

Hours before Francis arrived, the European border patrol agency Frontex intercepted a dinghy carrying 41 Syrians and Iraqis off the coast of Lesbos. The refugees were detained and brought to shore in the main port of Mytilene.

The wreath-tossing ceremony is a gesture Francis first made when he visited the Italian island of Lampedusa in the summer of 2013, his first trip outside Rome as pope, after a dozen migrants died trying to reach the southern tip of Europe. He made a similar gesture more recently at the U.S.-Mexican border, laying a bouquet of flowers next to a large crucifix at the Ciudad Juarez border crossing in memory of migrants who died trying to reach the U.S.

"He is slightly provocative," said George Demacopoulos, chair of Orthodox Christian studies at the Jesuit-run Fordham University in New York. Citing Francis' Mexico border visit in February, in the heat of a U.S. presidential campaign where illegal immigration took center stage, he added: "He is within his purview to do so, but that was a provocative move."

The Vatican insisted Saturday's visit is purely humanitarian and religious in nature, not political or a "direct" criticism of the EU plan.
However, the Vatican official in charge of migrants, Cardinal Antonio Maria Veglio, has said the EU-Turkey plan essentially treats migrants as merchandise that can be traded back and forth and doesn't recognize their inherent dignity as human beings.

The March 18 deal stipulates that anyone arriving clandestinely on Greek islands on or after March 20 will be returned to Turkey unless they successfully apply for asylum in Greece. For every Syrian sent back, the EU will take another Syrian directly from Turkey for resettlement in Europe. In return, Turkey was granted concessions including billions of euros to deal with the more than 2.7 million Syrian refugees living there, and a speeding up of its stalled accession talks with the EU.

Human rights groups have denounced the deal as an abdication of Europe's obligations to grant protection to asylum-seekers.
The pope's trip to Lesbos also has a significant religious dimension.

The Vatican spokesman, Lombardi, said the ecumenical significance of a meeting between Francis, Patriarch Bartholomew and the head of the Church of Greece, Athens Archbishop Ieronymos II was "obvious." He credited Greece's politicians with their willingness to let the religious leaders take center stage as an "appreciated" gesture of discretion.

Lombardi said the ecumenical significance of a meeting between Francis, Ecumenical Patriarch Bartholomew and the head of the Church of Greece, Athens Archbishop Ieronymos II was "obvious." He credited Greece's politicians with their willingness to let the religious leaders take center stage as an "appreciated" gesture of discretion.