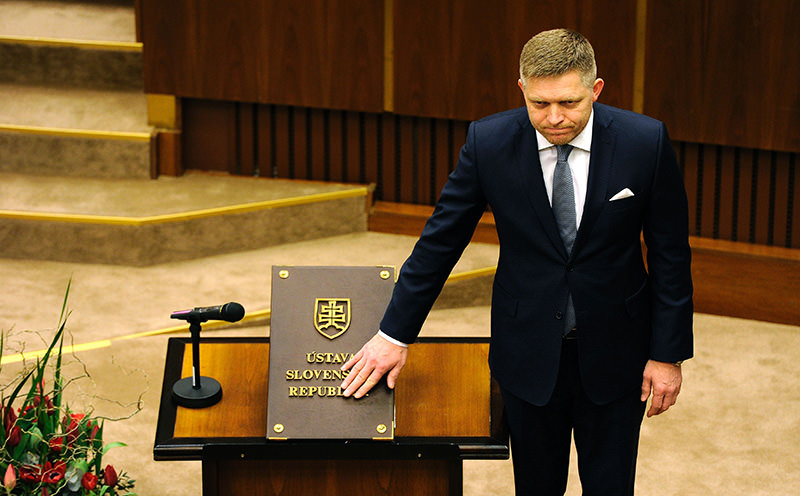 Known for his anti-migrant stance, Slovak Prime Minister, Robert Fico, who was hospitalized last Thursday due to chest pains, was treated by a doctor who in fact sought asylum in his country.

The 51-year-old Fico is currently being held at capital Bratislava's National Institute of Cardiovascular Diseases after undergoing a cardiac examination, and is expected to remain at the hospital for a week.

Citing Czech newspaper Novinky, BBC Turkish reported that Fico's doctor Mongi Msolly, who is also the director of the institute, is a Tunisian refugee who arrived in former Czechoslovakia in 1980 and completed his education in the country. Following the division as Czech Republic and Slovakia in 1993, Msolly stayed in the latter.

Slovak prime minister in known for his harsh stance against refugees, who repeatedly called for refugees to be kept out of European Union's borders.

Slovakia's regional allies the Czech Republic, Hungary and Poland have also maintained a similar attitude. He previously said that he will refuse to take any decision "which would give rise to a distinct Muslim community in Slovakia" and slammed the EU's quota program to redistribute arrivals.

Fico sworn in as a prime minister again after his leftist Smer-Social Democracy party won a parliamentary election in March. He canceled his first foreign trip to neighboring Czech Republic due to health reasons last week and was scheduled to travel to Hungary and Poland this week.

Fico, who is also a regular jogger and plays football, has a history of spinal problems and sports-related injuries without any known heart issues.