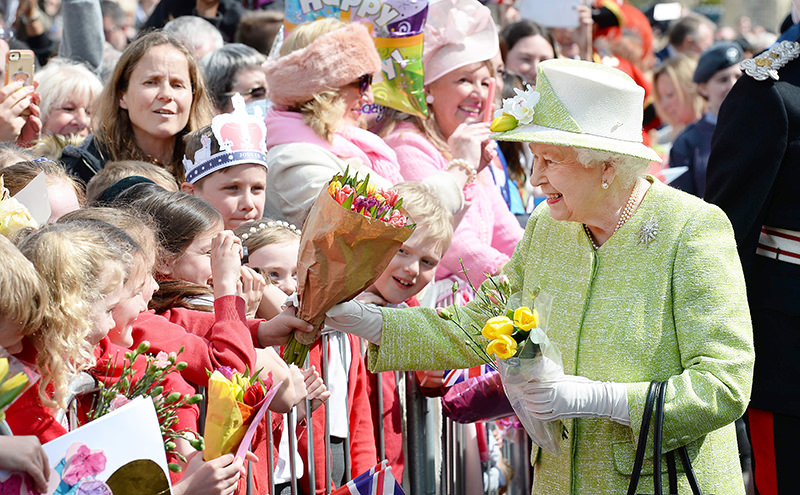 Britain celebrated the 90th birthday of Queen Elizabeth II on Thursday with tributes to a popular monarch who has steered it through the decline of empire and a wave of scandals to the Internet age.

The sovereign, on the throne since 1953, emerged from Windsor Castle dressed in a lime green outfit and matching hat to accept presents and flowers from hundreds of well-wishers.

Prime Minister David Cameron praised her achievements in a special "humble address" to parliament while her son and heir Prince Charles read from William Shakespeare in a special broadcast on BBC radio.

She will also light a beacon, the first in a chain of a thousand around the country and the world, symbolising the length of her life and her reign.

In a speech to the House of Commons, Cameron said she had been "steadfast, a rock of strength" adding that Britain was "uniquely blessed" to have her.

Labour leader Jeremy Corbyn, a rare republican in public life, added that, whatever "different views" people have about the monarchy, most believe the queen "has overwhelming support".

While still active, the queen has scaled back her duties in recent years as Charles and grandson Prince William plus wife Kate take a more prominent role.

The royals remain popular but some question what will happen when the queen -- who is in good health, enjoying regular rides on her favourite pony and walking her corgis -- reaches the end of her life.

In an editorial, The Times newspaper praised her as "a symbol of continuity and the best embodiment we have of a complex national identity".

But it warned the monarchy "will not long retain its popularity" if Charles, who often writes to ministers about issues close to his heart like the environment, is seen to breach constitutional convention by interfering in politics as king.

To mark the royal birthday, there were two military gun salutes at London's Hyde Park and the Tower of London and crowds gathered outside Buckingham Palace.

Later, parliament will be lit up in the red, white and blue of the British flag.

They were shot at Windsor Castle, where she will on Friday host US President Barack Obama and First Lady Michelle Obama.

In one photograph, the monarch is pictured with four of her dogs outside the castle west of London.

In another, she is surrounded by some of the youngest members of her family, including a great-granddaughter clutching one of her handbags.

Charles read an extract from Shakespeare's "Henry VIII" in tribute to his mother on the BBC.

It referred to a princess who was "a pattern to all princes living with her/ And all that shall succeed".

The queen was also presented with an orange drizzle cake baked by Nadiya Hussain, winner of cookery show The Great British Bake Off.

The royal family is currently in a strong position due in part to the perception of the queen as separate from politics.

When The Sun newspaper published a story last month claiming she supported Britain leaving the European Union in a June referendum, Buckingham Palace swiftly complained to the press watchdog.

The queen did, though, make a carefully choreographed intervention in the 2014 Scottish independence referendum with a warning that people should think "very carefully" about the future.

The monarchy has not always been on as sure a footing as it seems to be now.

It went through what the queen described as an "annus horribilis" or horrible year in 1992 when Prince Charles separated from his first wife Diana, while two of her other children also went through breakups and Windsor Castle was hit by fire.

The monarchy's popularity plunged after Diana died in a Paris car crash in 1997 and the queen was accused of reacting coldly.

Advisors subsequently steered the royals towards a more modern image.

Some 68 percent of Britons think the monarchy is good for Britain, according to a YouGov survey last year.

"She hasn't put a foot wrong," he added, before launching into a rendition of the national anthem.