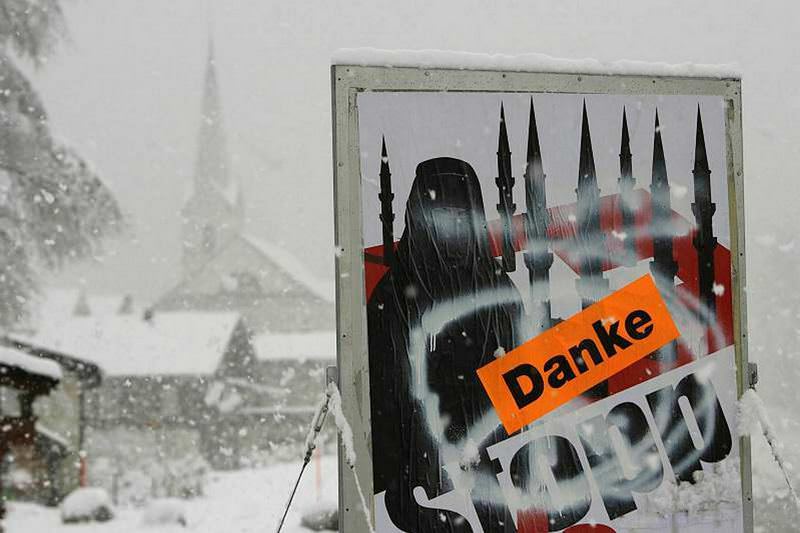 Several anti-immigrant and anti-Islam groups have been organized across Europe.
by Daily Sabah with Wires Apr 21, 2016 12:00 am

As anti-immigration sentiment increases across Europe, Switzerland has suspended the citizenship process of a Muslim family after brothers refused to shake female teachers' hands, saying it violates their beliefs

Switzerland has suspended the citizenship process for the family of two teenage Muslim brothers after the boys' refusal to shake hands with their female teachers sparked a national debate over religious freedoms. The brothers, aged 14 and 15, had informed education officials in the northern municipality of Therwil that physical contact with women who are not family members violated their faith. They were then exempted from a Swiss custom of pupils shaking teachers' hands, with Therwil officials instructing them to avoid contact with male teachers as well to avoid gender discrimination. But the compromise sparked a heated response from leading Swiss politicians including the justice minister, Simonetta Sommaruga, who insisted that "shaking hands is part of [Swiss] culture".

On Tuesday, authorities in the canton of Basel-Country where Therwil is located, said that naturalization proceedings for the family had been put on hold. Basel-Country spokesman Adrian Baumgartner, in an email, confirmed a report from the ATS news agency on the suspension. The report also noted that such suspensions are common in citizenship procedures as authorities often require supplemental information about the families concerned. Amid the media storm that surrounded the handshake exemption, Basel-Country requested an expert legal opinion, which Therwil pledged to follow.

The father of the two boys, an imam based in Basel and a Syrian national, moved to Switzerland in 2001 and was granted asylum. Basel's migration office was seeking more information about the circumstances under which the father's asylum request was approved. Switzerland's population of eight million includes an estimated 350,000 Muslims. Previous similar disputes have centered on Muslim parents who demanded that their daughters be exempt from swimming lessons. Muslim families have, however, secured victories in court against schools which sought to ban the full face veil.

Anti-immigration ideology and xenophobia have become more visible in Europe, especially in Germany as a result of the efforts of political parties such as the National Democratic Party of Germany (NPD) and AfD as well as anti-Islam and anti-immigrant initiatives like PEGIDA, which have staged anti-immigrant rallies and have drawn thousands of people throughout Europe, especially in Germany. In fact, anti-migrant and Islamophobic sentiment has been on the rise not only in Germany but across Europe. There has been a shift towards right-wing parties, which have been gaining popularity amid rising public fears regarding the refugee influx. Recently, polls indicate a rise in support for right-wing parties in France, Austria, Poland and Switzerland. Since the Paris attacks, the public has generally become more aggressive towards Muslims. In France the number of attacks on mosques and Muslims has risen enormously while the security apparatus has profited immensely by being highly subsidized.

Denmark's parliament on January adopted the reforms aimed at dissuading migrants from seeking asylum by delaying family reunifications and allowing authorities to confiscate migrants' valuables. International outrage against Denmark has focused on the plans to take cash and valuables from migrants to help pay for their stay in asylum centers, while rights activists have blasted a proposed three-year delay for family reunifications as a breach of international conventions.

The majority of migrants come from the Middle East and Africa. The turmoil in the Middle East and the five-year civil war in Syria have led many people to flee the conflicts in an attempt to seek security and shelter in more prosperous and peaceful countries such as those in Europe. However, the EU has been slammed for lacking a collaborative response to the crisis.
RELATED TOPICS