Dutch 'horror dentist' sentenced to 8 years for assault in France 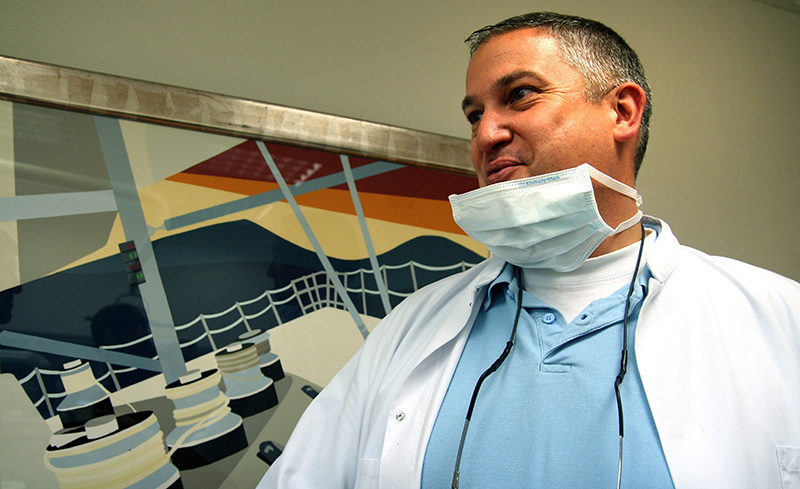 In the space of one hour in March 2012, Sylviane Boulesteix's dentist had wrenched eight front teeth from her mouth and replaced them with ill-fitting dentures. Then, as blood was still flowing from her raw gums, he went for lunch.

The 66-year-old widow was one of scores of victims of Jacobus Van Nierop, nicknamed the "horror dentist" by French media for massacring the mouths of patients over a three-year period.

"I spent three hours in his office gushing blood," she told The Associated Press. "He never explained what he was doing. He's a butcher, a charlatan."

On Tuesday a court in the town Nevers in central France found Van Nierop guilty of assault and fraud, sentencing him to eight years in prison for 85 counts of "deliberate violence," among other crimes. He was also barred from practicing dentistry for life.

The 51-year-old showed no signs of emotion when the court returned its verdict.

About 100 plaintiffs had filed complaints against Van Nierop, ranging from having multiple healthy teeth removed, drill bits left in their gums and teeth, abscesses, recurrent infections and misshapen mouths following his interventions.

The Dutchman was accused of illegally practicing dentistry in France, mutilating and disabling patients from 2009 to 2012, and of overcharging patients and billing them for imaginary procedures.

In their 130-page ruling, the judges convicted him of assault and 61 counts of fraud against patients, their health insurance companies and the local social security agency. They fined him 10,500 euros ($12,000) and said they will decide the amount of damages due to 62 of the plaintiffs in June.

The court acquitted the defendant of six counts of assault and some counts of fraud. Van Nierop has 10 days to file an appeal. He has been detained in a French prison since January 2015.

Marie-Jo Lemoine, another victim of Van Nierop, celebrated the verdict.

"It's silly to say that but I say it: It feels good. He will have time to think about us," she said. As for the compensation, "it won't be enough to repair the harm he caused."

In her closing speech last month, prosecutor Lucile Jaillon-Bru said that in Van Nierop "there was only greed, indifference to another, even some enjoyment in making others suffer."

She said the dentist's goal "was to always make more money" and that for the victims "the price of pain is enormous."

Van Nierop's lawyer Delphine Morin-Meneghel acknowledged her client was responsible for some bad procedures but insisted he committed no intentional or premeditated violence toward any of his patients.

When the dentist opened his office in late 2008 he was first welcomed by residents in the small town of Chateau-Chinon, located in a remote part of France's Burgundy region known as a "medical desert" because of a lack of medical professionals.

Van Nierop provided false documents to practice dentistry in France and concealed that he was the subject of disciplinary proceedings in his own country.

The Dutchman lived in an imposing home with a swimming pool, drove expensive cars and visited luxurious hotels, but had debts of nearly 1 million euros, according to court documents. He may be insolvent, which worries the plaintiffs who had claimed more than 3 million euros overall in damages.

In late 2013, Van Nierop fled to Canada before being extradited to the Netherlands and then France.

Psychiatrist Dr. Jean-Claude Guillaume and psychologist Michel Michel Bernardi said he showed a narcissistic personality with an absence of all moral sense and did not appear to feel any compassion.

During the trial, the lawyer for one patient told the dentist his client was just waiting for apologies.

Van Nierop replied: "I have no feelings anymore. So, if I was offering my apologies today, I would be lying."