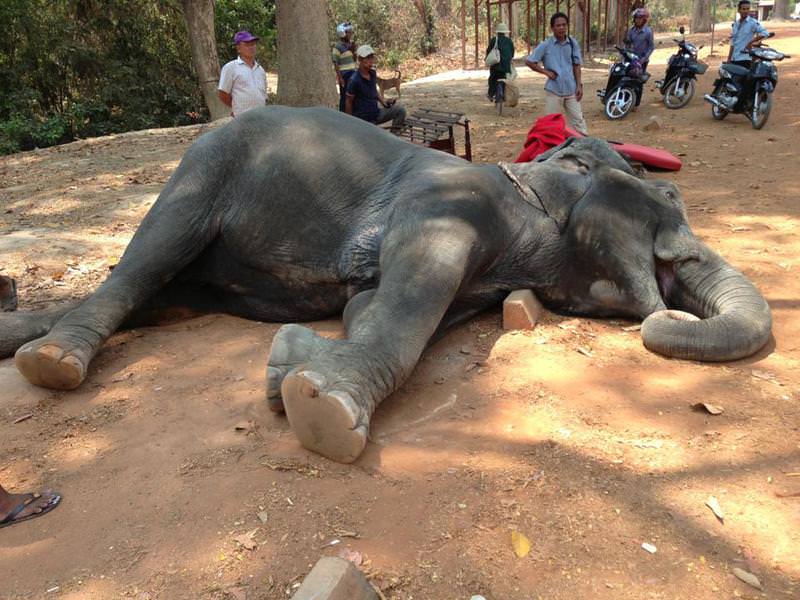 A Cambodian tour operator said Tuesday it would reduce work hours for elephants during high temperatures following the collapse and death of an animal which had been ferrying tourists in 40C heat.

The female elephant, aged between 40-45, died by the roadside on Friday after carrying tourists around Cambodia's famous Angkor Wat temple complex outside Siem Reap.

Oan Kiri, manager of Angkor Elephant Company, told AFP Tuesday that vets believed heatstroke was the cause of death.

"Veterinarians concluded that the elephant's death was caused by the hot temperatures which caused stress, shock, high blood pressure and a heart attack," he said.

The elephant had been working around 45 minutes, walking 2.1 kilometres carrying tourists, before she collapsed on her way to an enclosure.

He added that the company was "regretful and felt pity" and would now let the 13 remaining elephants work fewer hours until temperatures drop.

The Greater Mekong region is experiencing its hot and dry season where temperatures of 40C (104 Fahrenheit) are not unusual. This year has seen particularly hot spells.

Animal rights groups have long complained that elephants which give rides to tourists across the region are routinely overworked and brutally broken in during training.

Thailand has seen multiple cases in recent months where elephants have killed their handlers or attacked tourists.

A petition on Change.org calling on Cambodian authorities to end elephant rides at Angkor had garnered 24,500 signatures by Tuesday afternoon.

"There is no such thing as cruelty-free elephant rides," it stated.

Handlers and tour operators have long argued that tourism provides much needed income and employment for people -- and for domesticated elephants that would otherwise risk abandonment and starvation.

But Jack Highwood, from the Elephant Valley Project, a Cambodian eco-tourism group, said the country only boasted about 70 domesticated elephants -- "too small a number not to regulate their use to protect their health and welfare."