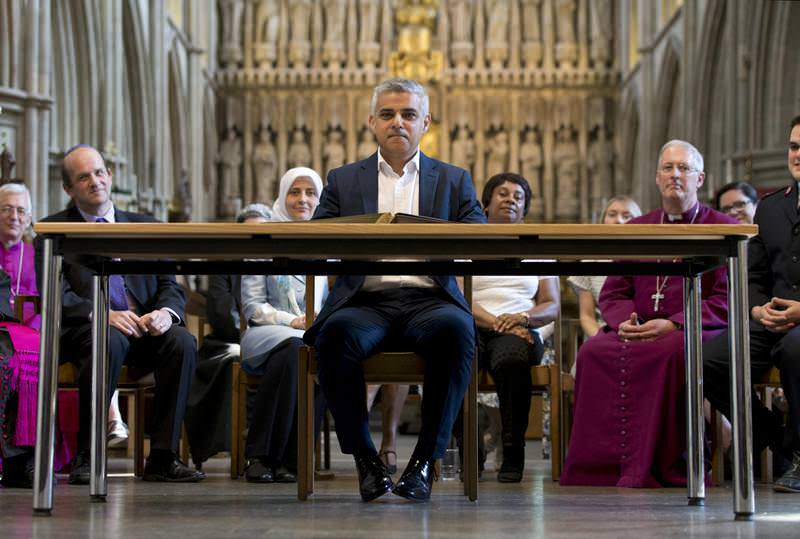 The day after being sworn in with a promise to be "mayor for all Londoners", the Labour lawmaker condemned Cameron's Conservatives for trying to link him to extremists during the election campaign.

Writing in The Observer newspaper, Sadiq Khan said the Conservative Party had "used fear and innuendo to try to turn different ethnic and religious groups against each other - something straight out of the Donald Trump playbook.

"Londoners deserved better and I hope it's something the Conservative party will never try to repeat."

Property billionaire Trump's own campaign for the Republican nomination has been criticized for attacks on Muslims and other minorities, including his call for Muslims to be barred from entering the U.S.

Khan won 57 percent of the vote in Thursday's mayoral election, securing 1.3 million votes to see off multimillionaire Tory Zac Goldsmith and making history as the first Muslim mayor of a major Western capital.

The 45-year-old, the son of a Pakistani immigrant bus driver, hailed his victory as a triumph of "unity over division" after weeks of Tory criticism over his past appearances at public events alongside radical Muslims.

A number of Conservative politicians criticised the tone of the campaign, but Defence Secretary Michael Fallon said the questions raised had been legitimate.

Khan had admitted representing some "pretty unsavoury characters" during his previous job as a human rights lawyer but said their views were "abhorrent".

"Both candidates were asked questions about their backgrounds, their personalities, their judgment, the people they associate with," Fallon told BBC radio.

"That's the nature of our democracy and the rough-and-tumble of politics."

Khan broke from convention by taking his oath of office in a multi-faith ceremony at Southwark Cathedral, promising to represent "every single community, and every single part of our city, as mayor for all Londoners".

Hillary Clinton, who as the likely Democratic nominee will face presumptive Republican nominee Trump in the race for the US presidency, led international congratulations.

"Son of a Pakistani bus driver, champion of workers' rights and human rights, and now Mayor of London. Congrats, @SadiqKhan. -H" she tweeted.

Former Conservative minister Sayeeda Warsi, herself a daughter of a Pakistani bus driver, hailed Khan's victory and condemned her party's attacks against him.

"Our appalling dog-whistle campaign lost us the election, our reputation and credibility on issues of race and religion," she said.