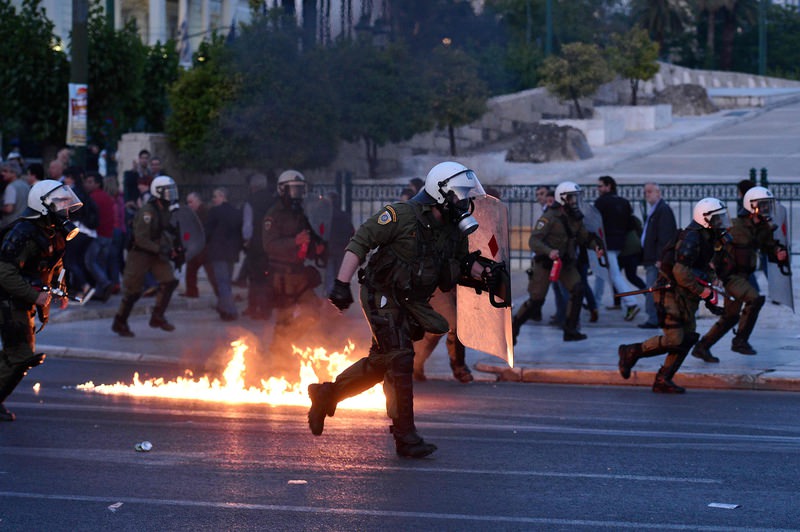 The Greek parliament has passed a controversial pension and tax reform bill after two days of tense debate between the Syriza-led government and opposition parties.

In the 300 seat parliament, 153 MPs from the coalition government of Syriza and Anel (Independent Greeks) voted for the bill, while 143 MPs from the opposition parties voted against.

The much-criticized bill has caused months of protests, culminating in nationwide strikes which have gripped the country for the past 48 hours.

For a second consecutive day the Greek capital was paralyzed as thousands of protesters brought the center of Athens to a halt in a demonstration against the leftist-led government's plans.

Roads around Syntagma Square in central Athens and the Greek parliament were closed on Sunday evening. Public transport was disrupted, leaving travellers stranded, as island ferries were also cancelled until Tuesday.

Despite the security lockdown, clashes occurred in Syntagma Square, with young anti-establishment protesters throwing fire bombs and clashing with riot police who responded with tear gas.

According to police nine people in total were detained during the clashes in two different areas in central Athens.

The second day of the debate on the tax and pension reform bill in parliament began early on Sunday and ended with a roll-call vote that night.

The debate was interrupted for almost an hour as Golden Dawn MP Yiannis Lagos was expelled from the House for offensive remarks about Energy Minister Panos Skourletis.

Main opposition New Democracy leader Kyriakos Mitsotakis attacked Prime Minister Alexis Tsipras during his speech, saying: "The measures we are voting on today are the bill for your delays, ineptitude and unreliability...at the end of 2014 there was no demand to reduce main pensions, only supplementary pensions."

Tsipras criticized Mitsotakis, saying that "for decades the pension funds were looted and the opposition recounts the myth that the pension system was derailed by a government that negotiated.

"For the first time the agreement, even though it is difficult, can be implemented," he added.

Tsipras initially came to power in Jan. 2015, promising to repeal austerity measures imposed by previous governments under a deal for the country to receive international rescue loans.