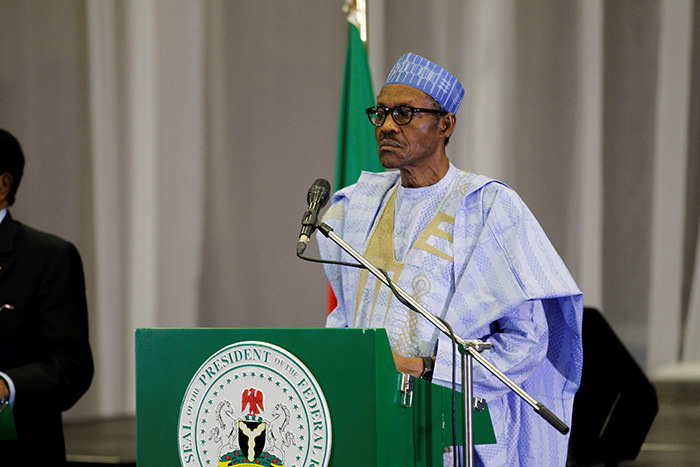 Nigeria's President Muhammadu Buhari speaks during a joint news conference with Cameroon's President Paul Biya in Abuja, Nigeria, May 4, 2016 (Reuters Photo)
by May 11, 2016 12:00 am

David Cameron's remarks during a conversation with Queen Elizabeth, caught on camera on Tuesday, have so far dominated the build-up to a global anti-corruption summit he is hosting on Thursday which Buhari will attend.

During a pre-summit event in London, Buhari was asked to respond to Cameron's comment that Nigeria and Afghanistan were "possibly two of the most corrupt countries in the world".

He has since noted that the leaders of both countries are working hard to combat corruption.

"I am not going to demand any apology from anybody. What I am demanding is the return of assets," Buhari said at an event, to applause from Nigerians in the audience.

"What would I do with an apology? I need something tangible," he said, rubbing his fingers together in a gesture commonly used to refer to money. The audience laughed.

Buhari has a reputation for personal probity and has pledged to crack down on corruption in Nigeria, Africa's top oil producer and most populous nation where generations of politicians have looted public coffers for their personal gain.

Buhari did not specify which assets he was talking about.

British police have conducted several investigations in recent years into assets held in Britain by Nigerian politicians, including two former state governors and a former oil minister. One of the ex-governors is serving a prison sentence in Britain after pleading guilty to money-laundering.

Nigeria is listed at number 136 out of 167 in campaign group Transparency International's latest Corruption Perceptions Index, an annual ranking of countries in which a higher number indicates a higher level of perceived corruption.

But British opposition politicians and anti-corruption campaigners have said Cameron was ill-placed to criticise Nigeria when Britain's own record on combating corruption was less than glorious.

They have said that corrupt politicians and business people from Nigeria and many other countries have laundered their ill-gotten gains in Britain's property market, while London also has ties to numerous tax havens routinely used to hide stolen money.

In his remarks on Wednesday, Buhari alluded to the case of Diepreye Alamieyeseigha, former governor of the oil-producing state of Bayelsa in the Niger Delta, who was arrested in London in 2005 on suspicion of money-laundering.

Alamieyeseigha skipped bail and fled back to Nigeria dressed as a woman. He was later impeached, tried and convicted in Nigeria of stealing millions of dollars of public money.

"He (Alamieyeseigha) had to dress like a woman to leave Britain and leave behind his bank account and fixed assets which Britain was prepared to hand over to us. This is what we are asking for," Buhari said.

Britain's Department for International Development (DFID) could not immediately provide details of any assets returned to Nigeria.