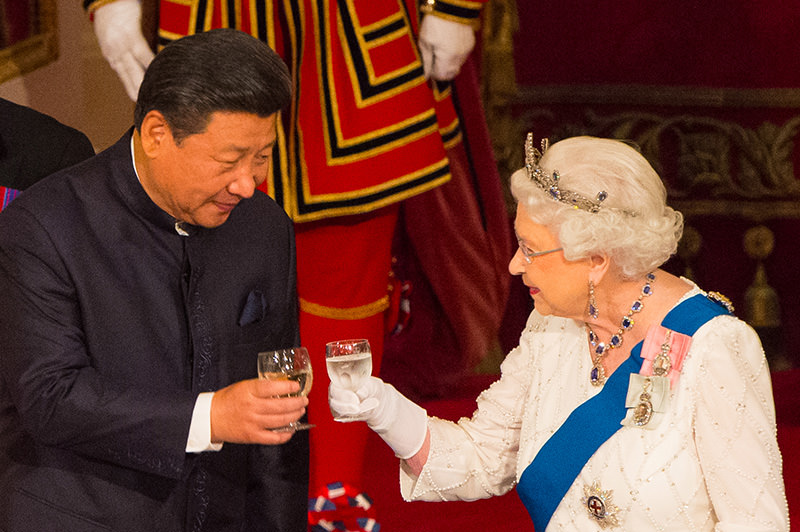 The British media is riddled with "barbarians" who would benefit from a lesson in manners from China's ancient civilisation, a state-run newspaper said Thursday after Queen Elizabeth II called some Chinese officials "very rude".

In a rare diplomatic gaffe, the British monarch was caught on camera at a Buckingham Palace garden party making unguarded comments about a state visit last year by President Xi Jinping that drummed up billions in Chinese investment.

The remarks made headlines worldwide on Wednesday but initially they were largely censored in China, blacked out of BBC World transmissions, according to the British broadcaster.

The Global Times newspaper, which is close to China's ruling Communist Party, blamed the British media for blowing the incident out of proportion and fawning over the footage as if it was "the most precious treasure".

"The West in modern times has risen to the top and created a brilliant civilisation, but their media is full of reckless 'gossip fiends' who bare their fangs and brandish their claws and are very narcissistic, retaining the bad manners of 'barbarians'," it said in an editorial.

"As they experience constant exposure to the 5,000 years of continuous Eastern civilisation, we believe they will make progress" when it comes to manners, it added in the Chinese-language piece, which was not published in English.

London and Beijing have both proclaimed a new "golden era" of relations between the former imperial power -- whose forces repeatedly invaded China in the 19th century -- and the rising Asian giant, now the world's second-largest economy.

Xi's trip in October saw a clutch of contracts announced, which Cameron said were worth almost $58 billion.

At the time the overseas edition of the People's Daily, the Communist Party's official mouthpiece, breathlessly portraying the visit as the start of a beautiful friendship.

But in her recorded comments the Queen commiserated with a police commander for her "bad luck" in having to oversee security for Xi and his wife.

Members of the Chinese delegation "were very rude to the ambassador", the monarch said, exclaiming: "Extraordinary!"

A columnist at Chinese website "Today's Headlines" recalled visible mutual discomfort during the three-day sojourn, describing it as "thought-provoking awkwardness" and adding it "primarily arose out of cultural and political differences".

On Chinese social media posters decried Britain's lack of awareness and understanding of Chinese ways, noting "an arrogance which makes them feel they needn't bother to learn".

"Every country's customs are different, OK - not all people must cater to you," wrote a commenter on the Twitter-like Sina Weibo.

"We're already embarrassed by talk about what our average people get up to abroad," said one. "Being embarrassed by our officials abroad is even worse."

The British monarch never expresses overtly political views in public and is known for her discretion, never granting an interview in her 64-year reign.

But her comments came as British Prime Minister David Cameron was recorded calling Nigeria and Afghanistan "possibly the two most corrupt countries in the world", heaping scrutiny on the tete-a-tetes of British leadership.

"Even among Western countries, Britain is most frequently 'caught with its pants down' and 'exposing itself'," the Global Times editorial said.

But it added that it would be "unthinkable" for British authorities to have deliberately leaked the royal footage, as "if they had deliberately done so, that would have been truly crude and rude".

The paper shrugged off the Queen's comments themselves as "not a big deal", stating: "Chinese diplomats surely also scoff at British bureaucrats in private."