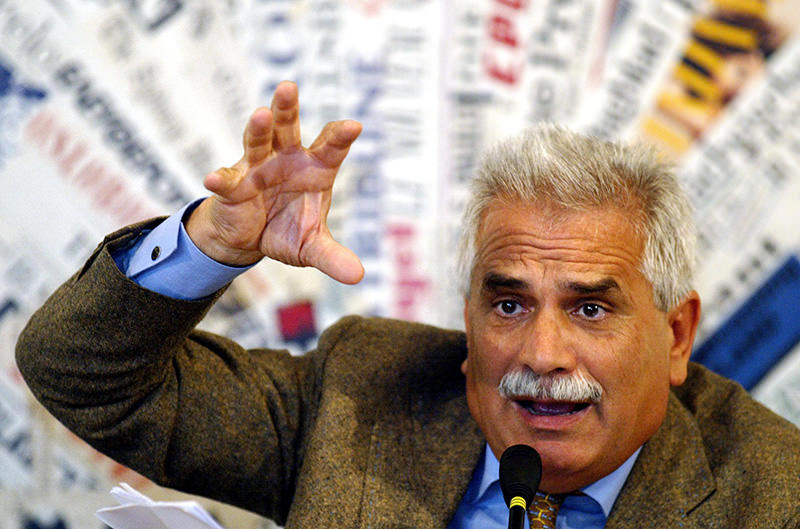 A controversial Italian gynaecologist famed for helping women in their 60s to have children is under house arrest in Rome on suspicion of removing eggs from a patient's ovaries without her consent.

Lawyers for Severino Antinori, who has been nicknamed the "grandmothers' obstetrician," dismissed the charges as absurd and claimed Saturday that their client had been the victim of attempted extortion.

Antinori, 70, was arrested at Rome's Fiumicino airport on Friday following a complaint filed by a 24-year-old woman who was treated for an ovarian cyst at the clinic, police said.

Antinori has had his licence to practice gynaecology provisionally suspended for a year and was ordered to stay at his Rome home pending further investigation into charges of aggravated robbery and causing personal injury.

The alleged victim was a Spanish national with a nursing qualification who had recently begun working at the clinic.

Prosecutors suspect Antinori met the woman by chance, set up a job interview and subsequently diagnosed the ovarian cyst with the sole intention of harvesting her eggs without her knowledge.

The woman says that prior to receiving treatment on April 5, she had her mobile phone taken off her before being forcibly immobilised, placed under anaesthetic and operated on without her consent.

She believed she was only going to be treated by injection for the cyst, according to her lawyer.

The investigation was triggered by the woman calling emergency services from a payphone in the clinic after she came round from the surgery.

But one of Antinori's lawyers said Saturday that the women had agreed to donate eggs and had signed detailed consent forms a month before the surgery.

Tommaso Pietrocarlo told Italian news agency ANSA that she had signed the forms "after a consultation with a psychologist who will state that she was conscious of the choice she was making and that it did not pose any problem."

Prosecutors are also working on the hypothesis that this may not be an isolated case, according to the Italian media.

"The arrest of Severino Antinori is extremely serious because it indicates the existence of a market in eggs that will not stop at anything," said Donata Lenzi, an Italian lawmaker from Prime Minister Matteo Renzi's Democratic Party.

Antinori became famous worldwide in 1994 when his fertility treatment led to Italian Rossana Della Corte giving birth to a son at the age of 63.

At the time she was the oldest woman to have given birth but that record has since been surpassed several times.

A 65-year-old, Annegret Raunigk, gave birth to quadruplets in Germany last year and Daljinder Kaur, who told AFP she was around 70, gave birth to a boy last month following fertility treatment in India, where a 72-year-old reportedly had a child in 2008.

Antinori was was also involved in the treatment of Patricia Rashbrook, who became Britain's oldest new mother when she had a boy in 2006 at the age of 62.

The physician has attracted controversy with his advocacy of the use of cloning technology to enable infertile couples to have children by injecting genetic material from a father into donated eggs.

It is unclear whether he has ever overseen the creation of a cloned child although he has suggested as much in interviews.