Germany offers employment to refugees for one euro 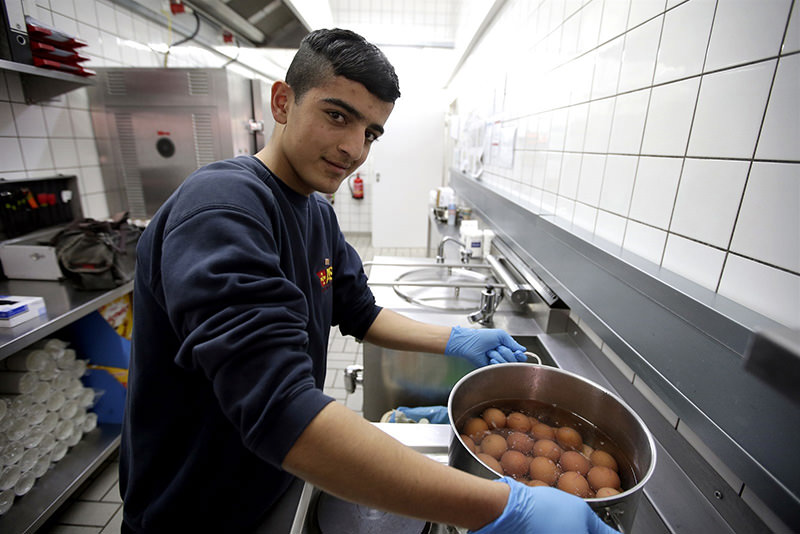 With a spoon and spatula in hand, Zaid, a 23-year-old Iraqi refugee, lifts the lid on a large pot filled with goulash and potatoes as he begins his shift.

From 6:30 to 8 pm, he is employed by the city of Berlin to dish out dinner to 152 other Syrian, Iraqi, Afghan and Moldovan refugees in a sports hall, which had been turned into an emergency shelter for the newcomers.

Zaid is one of thousands of refugees who have taken on tasks ranging from repairing bicycles to pruning plants to cleaning sidewalks for pay of just over one euro ($1.1) an hour.

The so-called "one-euro jobs" have been touted as a springboard for the newcomers into Germany's job market, but experts remain sceptical about their effectiveness.

At the sports gym, Zaid tries to explain to the sceptical faces crowded in front of him what went into the beef stew that he described as "so German".

For the work that includes setting the table, cutting bread, serving food and then cleaning up, he is paid 1.05 euros an hour.

Restricted to working no more than 20 hours a week, Zaid gets a monthly income of 84 euros at best, a small extra on top of the 143 euros he receives as pocket money while he waits for the official decision on his asylum application.

His monthly intake may be a tiny fraction of an average German wage, but Zaid takes on his job with a big smile.

"It allows me to have contact with the German volunteers who come here to distribute meals, and gives me a chance to speak the language," said Zaid who fled the city of Hilla, about 100 kilometres (62 miles) south of Baghdad, along with his father and sister six months ago.

"And I don't have to stand around in the centre not knowing what to do," he said.

With authorities often taking weeks, if not months, to process asylum applications, many refugees are bored out of their minds as they are not allowed to take on regular employment during that time.

To get around the problem, authorities have decided to make use of the one-euro job solution.

Conceived a decade ago with the aim of nudging the long-term unemployed back to work, it is now being used to help integrate a record influx of refugees, which topped 1.1 million last year.

The city of Berlin currently employs 3,925 refugees who are lodged in 75 centres, and wants to widen the offer to associations that offer public service such as charities helping the homeless or rehabilitative shelters for alcoholics.

In Bavaria, the main gateway for thousands of refugees in southern Germany, 9,000 refugees have taken up such jobs.

The city of Hanover also offers newcomers the possibility of working in bicycle repair, or sorting donated clothes, or accompanying kindergarten children in exchange for German language classes.

Labour Minister Andrea Nahles has promised to create 100,000 such posts for refugees, describing them as a "trampoline" into the job market.

"In the short term, it makes sense because the refugees can't otherwise work," Ronald Bachmann, economist at the RWI institute told AFP.

"Having them at work also sends a good political signal," he said, as anti-migrant populism surges in tandem with Germany's record refugee influx.

Nevertheless, Bachmann noted that the one-euro jobs had not proven particularly successful in their original task of getting the long-term unemployed back to work.

"It was very, very rare that they helped to bring them back to a job market as one learns very little from such jobs," said Bachmann.

The head of the German Federation of Unions, Reiner Hoffmann, also spoke out against placing refugees in such jobs as he believed that Germany needs a far more ambitious programme to integrate the newcomers into the economy.

Holger Schaefer, an expert in the job market at IW institute, similarly had harsh words for the programme, saying "we are in fact subsidising the exclusion of refugees from the job market".

In any case, Zaid has no intention of pursuing his budding career in the restaurant business.

He has just signed up for a class in a Berlin high school which should help him to resume his studies in IT, which had been abruptly halted in Iraq.