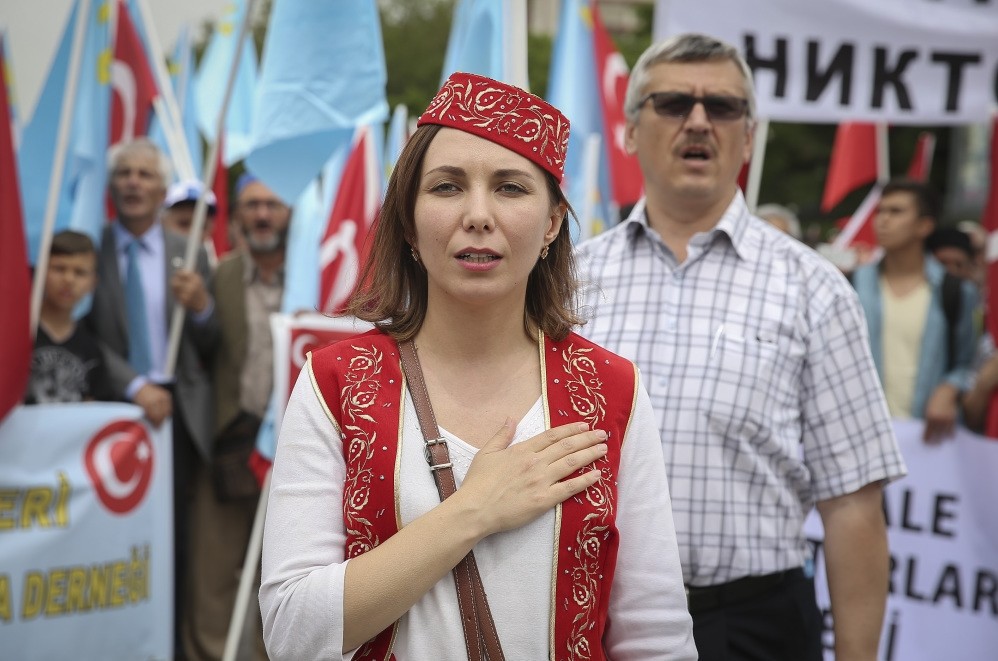 Crimean Tatars who live in Turkey commemorate the 72nd anniversary of the Soviet Union deportation of Crimean Tatars in Ankara on May 14.
by Daily Sabah with AA May 18, 2016 12:00 am

On the 72nd anniversary of the deportation of Crimean Tatars by Joseph Stalin, members of the ethnic group feel insecure once again after Russia's illegal annexation of Crimea in 2014

Ukraine commemorates the 72nd anniversary of the deportation of Crimean Tatars by the Soviet Union, in which thousands of people who were deported to Central Asia and endured long months of dire living conditions are thought to have died of starvation and disease.

In an exclusive interview with Anadolu Agency (AA), Sergiy Korsunsky, the Ukrainian ambassador to Ankara, said yesterday that Ukraine and Turkey should continue working together to retake Crimea. Korsunsky said on the lead up to the May 18 anniversary of Joseph Stalin's deportation of the Tatars from Crimea in 1944 that Ukraine and the international community will not recognize the annexation of Crimea.

Crimean Tatars make up roughly 13 percent of Crimea's 2.1 million people. On May 18, 1944, tens of thousands of Crimean Tatars were deported to Central Asia by Stalin's Soviet regime, which accused them of collaborating with occupying Nazi forces. Around 180,000 people were deported to various regions within Soviet territory, in particular Siberia and Uzbekistan. Almost half of the exiles, who endured long months of dire living conditions, are thought to have died of starvation and disease. This 30-year exile continued until 1987, when the Soviet government allowed 2,300 Crimean Tatars to return to their homeland. Another 19,300 people followed in 1988.

Korsunsky said 100 Crimean occupants were arrested after Friday prayer on May 6 without any explanation. "We – Ukraine and Turkey – share the Black Sea region, and we share this neighbor, Russia. If you recall history from the 15th century until now, you will see that both Ukraine and Turkey have always had problems with Russia," Korsunsky stressed.

He added that since Ukraine became a part of the Russian Empire after Moscow annexed Ukraine's territory at the end of the 17th century, Moscow violated every promise it gave to Ukraine regarding the protection of its rights and freedom. "Since then, the Russians have done everything possible to eradicate Ukraine's soul, culture and language. The same is the case with Crimea," he said.

Crimea was formally annexed by Moscow in March 2014 after an illegal independence vote on the heels of violent anti-government protests in the Ukrainian capital, Kiev, which led to the overthrow of then-President Viktor Yanukovych. Turkey has been standing by the community over the exile they were subjected to during World War II and the oppression they are currently facing at the hands of Russia as part of the Ukrainian conflict.

More than 9,000 people have lost their lives due to the conflict between the Ukrainian government and pro-Russian rebels since April 2014, according to the United Nations. The U.N. General Assembly voted almost unanimously to proclaim the annexation illegal. Along with many U.N. countries, including the United States and the European Union, Turkey does not recognize Crimea as Russian territory.

Since the unlawful Russian annexation of the Crimean peninsula in March 2014, the region's Tatar minority has complained of repression, including arbitrary arrests and detentions. The assembly of Crimea's Tatars, known as the Mejlis, was banned by the Supreme Court of Crimea in April as an "extremist organization" following a prosecution application lodged in February. Ukraine's Foreign Ministry, as well as the Turkish Foreign Ministry, described the move as a "violation of human rights" and part of a continued campaign of "intimidation and oppression."

According to Korsunsky, Russia's strategy is to control the Black Sea region. He stressed that Russia is now moving huge military contingents of aircraft, ships and submarines to Crimea. Through the militarization of Crimea, Russia has transformed it from peaceful tourist zone to a huge military base, he said, adding that some experts maintain that Russia has moved nuclear weapons to Crimea as well. "Against whom? Of course, against NATO and, first of all, Turkey. I'm not saying they're going to start a war, but those moves violate every norm of international law and civilized behavior," he said.

The ambassador added that he is very happy that Ukraine has Turkey's full support on this issue and both will continue to work with the Crimean Tatar community. "We try to continue to push Russians to fulfill their obligations. In spite of the fact that now it looks like we can do little, we will not stop. We are sure that the international community should continue applying sanctions; Ukraine and Turkey should continue working together to free Crimea. There is no other way out of this. We will not recognize this; the international community will not recognize this. We are 100 percent sure that Turkey will be with us on this," he said.