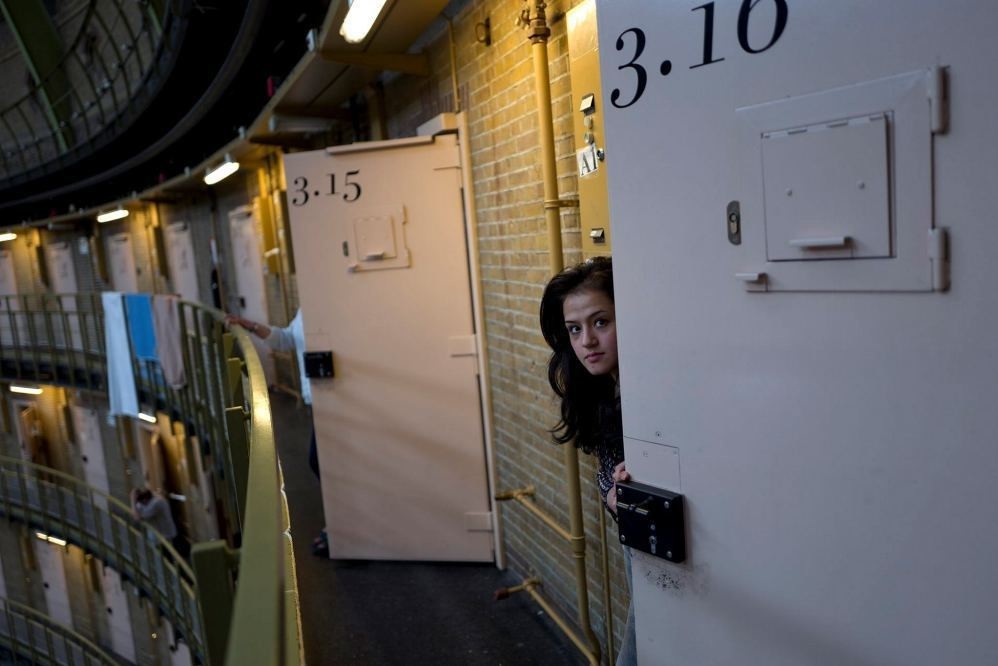 An Afghan refugee peeks through the door of her room at the former prison of De Koepel in Haarlem, Netherlands.
by Daily Sabah with Wires May 19, 2016 12:00 am

European countries have started applying stricter measures for migrants who have fled war-torn countries. While thousands of underage migrants are forced to involve in crime, Finland seeks to send Iraqis, Afghans and Somalis back to their countries

European countries have started tightening restrictions on migration procedure and showing will not to accept refugees who are fleeing from war-torn countries like Syria, Iraq, Afghanistan or Somalia. While Finland claims that the migrants from Iraq, Afghanistan and Somalia can go back to their 'safe' countries, thousands of underage migrants are trying to live on their own without their families and involving in crime. The migrants, who have overcome with the strict migration measures and are seeking a safe shelter, are offered to stay in prisons by the Netherlands.

Outside the train station in Rome, teen migrants sell drugs from school backpacks and trade sex for cash or clothes. In the capital of Sweden, they steal food from supermarkets and sleep on the streets. From makeshift camps along the northern French coast, they try to hop at night onto the backs of moving trucks headed to Britain. All across Europe, there is a growing shadow population of thousands of underage migrants who are living on their own, without families. They hide silently and in plain sight, rarely noticed in the crowd. Nobody even knows how many of them there are, Europol estimates broadly that at least 10,000 kids have gone missing from shelters or reception centers. These unaccompanied minors are slipping through the seams of a European system strained to bursting, and they present one of the biggest challenges of the migrant crisis. The fact that accurate numbers are so hard to come by reflects the shortcomings of the bloc's 28 member states in implementing laws and guidelines that are supposed to protect asylum seekers in general and unaccompanied minors in particular. While the problem is not new, the sheer volume of migrants arriving last year has made it acute. Like adult migrants, minors are flooding into Europe for both security and economic reasons, the AP found in interviews with more than two dozen. The question is where they end up.

Imran, a 13-year-old from Afghanistan, has passed through at least eight countries, mostly on foot, and is now trying to make it from a squalid migrant camp in Calais to the U.K. He dresses neatly in a donated sweat suit and tells his story politely. Only his gym shoes cracking at the seams and the cloud over his face hint at the hardship of his life, light years from his dreams of going to "doctor school." The Taliban shot Imran's father when he was 8 or 9, and threatened to kill him too when he grew up. He says he started to receive letters at his house. Frightened, his mother sold the building that provided the family's income to pay smugglers for Imran to join his uncle in Britain. Most nights Imran tries to sneak onto trucks to Britain, a dangerous venture which the Afghans call "going to the game." A 15-year-old Afghan died in January from sticking his head out and hitting an obstacle, and a 7-year-old who escaped Calais almost suffocated last month after the locked truck reached Britain. It is not uncommon here to see migrants with crutches or other injuries from failed efforts to jump onto moving vehicles. During the day, Imran looks haggard from lack of sleep. He has not talked to his mother in four months, and he describes life in the camp residents dub the Jungle as fit for "dogs and cats." Imran is his nickname; the AP is not using the full names of children in this story to protect them. "The hardest for me, the first thing, is mother. The second thing is the life. This is a shit life," he says, in what he calls Jungle-speak English. "If my mother sees I'm in the Jungle, she will be very sad..I don't want to tell her."

In 2015, almost 90,000 asylum seekers in the European Union were unaccompanied minors under 18, according to Eurostat. That's up about nine times from just three years ago. About half run away from asylum centers or shelters within two days of their arrival, according to Missing Children Europe, which represents nonprofits in 24 countries. Sometimes they are discouraged by how long it takes to get legalized, or fear being sent home or to the country where they first arrived. And sometimes they join family members, or just try their luck at asylum elsewhere. European Union officials say they have developed projects to improve the reception of minors, provide them with health assistance and relocate or unite them with relatives faster. Germany, for example, provides minors who stay at shelters with about 30 to 70 euros a month in pocket money. "European legislation pays particular attention to the rights and needs of unaccompanied minors seeking asylum," European Commissioner Dimitris Avramopoulos told The Associated Press. "Implementing these rules is therefore our priority." However, missing young migrants, most of whom are 14 or older, are treated very differently from missing children in general. For example, the EU Fundamental Rights Agency recommends they be assigned a guardian responsible for reporting disappearances to police, but that seldom happens. Even when cases are reported, police seldom have enough information to follow up, such as a photo of the child, personal data or fingerprints.

Despite the threats, posed by war, conflict and radical groups in their countries, Finland claims that Iraq, Afghanistan and Somalia are safe countries and migrants of the three countries, can go back to their homelands. Finland tightened restrictions

on giving residence permits to asylum seekers from Afghanistan, Iraq and Somalia on Tuesday, saying it was now largely safe for them to return to their war-torn homes. Authorities in Helsinki, where anti-immigration political groups have been on the rise, said security had improved to such an extent that refugees would generally not be at risk in any parts of the three countries, despite the running conflicts. There was no immediate reaction from refugee agencies. But the statement by the Finnish Immigration Service came in the face of a string of international assessments of the scale of the ongoing bloodshed and refugee crisis. "It will be more difficult for applicants from these countries to be granted a residence permit," the immigration service said in a statement. "It is currently possible for asylum seekers to return to all areas in Afghanistan, Iraq and Somalia without the ongoing armed conflicts as such presenting a danger to them only because they are staying in the country." Asylum seekers would now only be allowed to stay if they could prove that they were individually at risk.
RELATED TOPICS