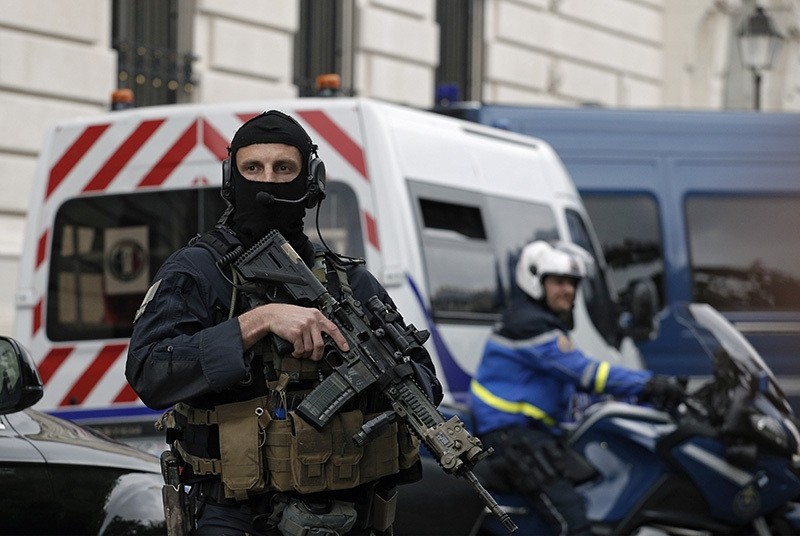 Members of French military task force GIGN secure the convoy transporting Paris attacks suspect, Salah Abdeslam as they leave the Paris courthouse, Friday, May 20, 2016. (AP Photo)
by May 20, 2016 12:00 am

Top Paris attacks suspect Salah Abdeslam remained tight-lipped when questioned by a French anti-terror judge for the first time on Friday, one of his lawyers told AFP.

Authorities had hoped he would shed some light on the operational details of the November attacks that killed 130, as well as provide clues as to whether other members of the wider extremist cell are still at large. But his lawyer Frank Berton said: "He did not want to say anything today." The 26-year-old was prepared to speak at "a later date," the lawyer added. "We need to give him time."

Abdeslam is the last surviving member of the team of DAESH gunmen and suicide bombers who killed 130 people at bars and restaurants, in the Bataclan concert hall and outside the Stade de France national stadium last November.

For months, he was the most wanted fugitive in Europe until he was tracked down and arrested on March 18 in the Brussels neighborhood of Molenbeek where he grew up. Transferred to France on April 27, he is being held at Fleury-Merogis prison, southeast of Paris.

The Paris prosecutor's office said: "From the start, he exercised his right to remain silent by refusing to reply to questions from an investigating magistrate. "He also refused to give his reasons for using his right to silence. "He declined to confirm the statements he made previously to the Belgian police and to a Belgian investigating magistrate," the prosecutor's office added.

A childhood friend of suspected ringleader Abdelhamid Abaaoud, Abdeslam is thought to have played a key role both on the night of the Paris attacks, and in their preparation. Two other suspects have been arrested in France, but they are considered secondary participants.

Abdeslam dropped off the three suicide bombers who blew themselves up outside the Stade de France, killing one person. He is thought to have backed out of blowing himself up. An abandoned explosives vest was found in a dustbin in southern Paris close to where mobile phone data placed him on the night of the attacks, although his DNA was not found on it.

CCTV pictures from petrol stations showed him fleeing back to Belgium in the hours after the attack. He also played a critical role in the build-up to the attacks, renting the cars and hideouts used by the gang.

In the months before the attack, he transported other extremists around Europe, including Najim Laachraoui, the suspected bomb-maker for the Paris attacks. Laachraoui was killed in a suicide bombing in Brussels on March 22. Bombers also struck a metro station in the Belgian capital that day, killing 32 people overall. Abdeslam could also shine light on the links between the attacks in Paris and Belgium, both claimed by DAESH. Berton had told AFP before the hearing that Abdeslam wanted to "explain himself." However, Jean Reinhart, a lawyer representing some of the victims, had warned before the hearing not to expect much in the early stages. "The first interviews are often about denials. We should maybe leave the process to unfold for a while," he said.