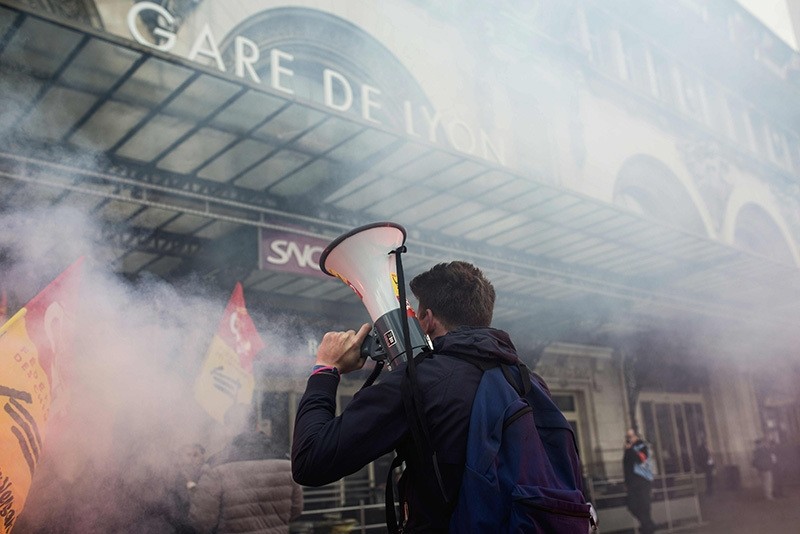 A protester holds a megaphone next to burning flares outside the Gare de Lyon in Paris on April 26, 2016, during a demonstration by railway workers of French state rail operator SNCF, as part of a strike to defend their work conditions. (AFP Photo)
by May 20, 2016 12:00 am

The French government urged railway workers on Friday to spare millions of commuters, soccer fans and tourists the misery of more train strikes when the country hosts the Euro 2016 soccer tournament next month.

Transport Minister Alain Vidalies made his appeal as unions confirmed their determination to hold strikes and marches against government plans to make it easier for employers to hire and fire.

"I seriously cannot imagine that the railway workers would run the risk of bringing France to a halt during such a crucial period," he told France Info radio.

"The Euro (tournament) is high-stake and everybody should keep in mind that nobody in France ... would understand if all this damaged France's image."

Dozens of national soccer teams and millions of fans are set to converge on France for the Euro 2016 competition from June 10 to July 10, with little sign that months of mounting upheaval over the labor reform plan will subside any time soon.

The CGT union said on Friday it would bring oil refineries to a standstill and announced two nationwide protests that will dovetail with more strikes at the SNCF state railways, where train services were halved by stoppages this week.

The unions say the labor reforms would undermine existing employee protection and are demanding the government drop what is a flagship policy for President François Hollande.

The two marches announced on Friday will be on May 26 and June 14, the latter during the soccer contest. The CGT also called an oil refinery strike that could cause fuel shortages for drivers.

"We are calling a halt to production at the refineries - to shut off at source so to speak," said Emmanuel Lepine, a CGT oil sector representative. "Our end-goal is not (fuel) shortages but withdrawal of the labor law."

Following days of road blockades by truckers near fuel and supermarket supply depots, there were long queues at fuel stations and isolated cases of petrol or diesel rationing in northwest France, French media reported.

The union gave formal notice of plans for repeats of this week's rail strike, where roughly 15 percent of 160,000 SNCF staff stopped work, disrupting services for more than two days.

Student unions and a broader youth protest movement called Nuit Debout (Night Rising) have joined the waves of demonstrations over recent weeks, where violent gangs of masked youths have clashed regularly with police on the fringes.