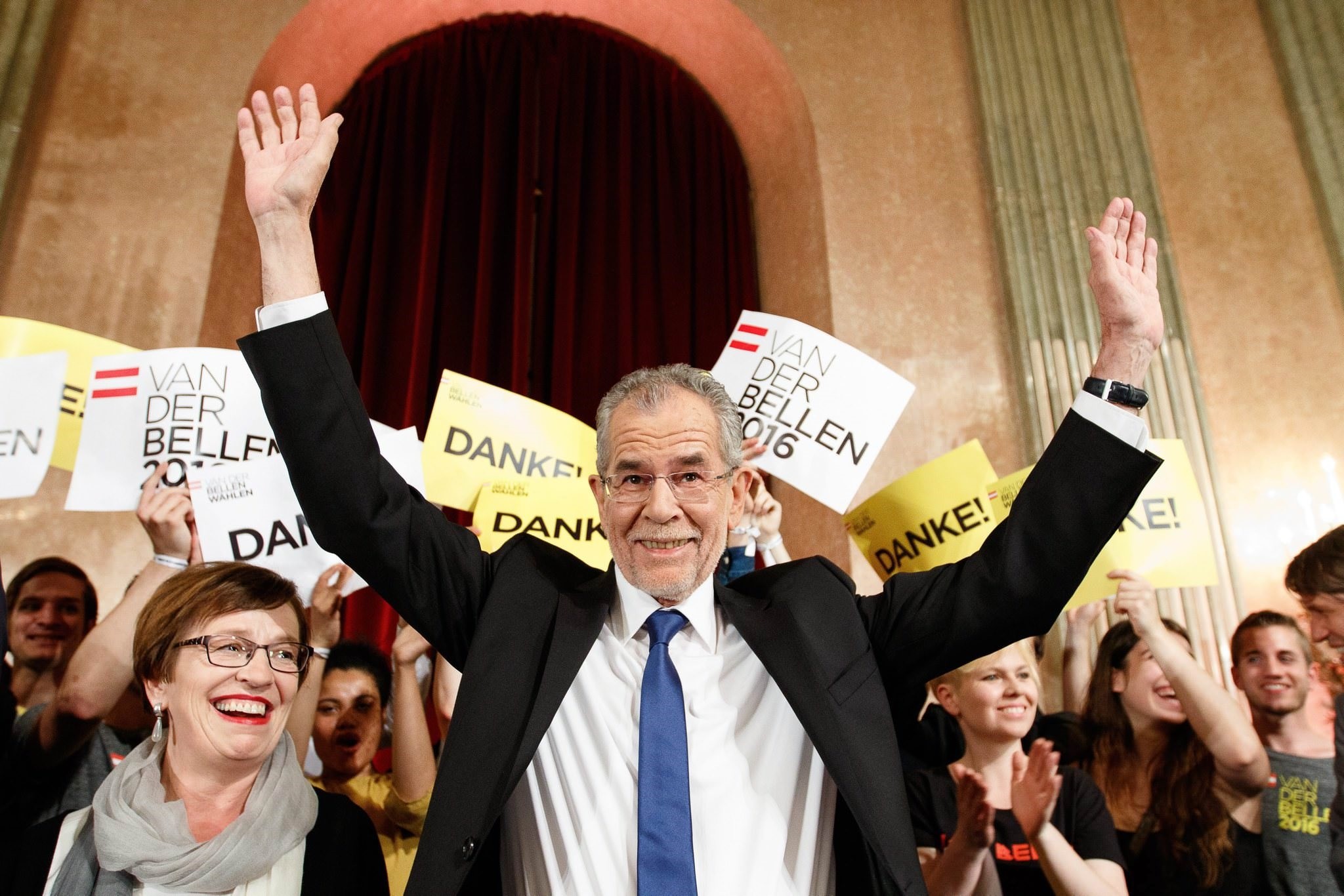 A file picture dated 22 May 2016 shows then presidential candidate Alexander Van der Bellen (C), waving to supporters at the Palais Auersperg. (EPA Pohto)
by Daily Sabah with AFP May 23, 2016 12:00 am

Norbert Hofer of Austria's far right yesterday conceded defeat in a knife-edge presidential election runoff ahead of an expected official announcement that his ecologist challenger had narrowly won.

"Of course I am sad," Hofer of the anti-immigration, populist Freedom Party (FPOe) said on Facebook. "But please don't be disheartened. The effort in this election campaign is not wasted, but is an investment for the future."

Direct votes Sunday without the count of about 700,000 absentee ballots gave Norbert Hofer of the right-wing, Euroskeptic Freedom Party 51.9 percent while Alexander Van der Bellen, a Greens politician running as an independent, got 48.1 percent. But projections Sunday that included the absentee votes had already put Van der Bellen slightly ahead.

Mirroring similar trends right across Europe and beyond - as seen with the popularity of Donald Trump across the Atlantic - voters in Austria are becoming increasingly disillusioned with mainstream parties.

In the first round on April 24, the candidates of the Social Democrats (SPOe) and their center-right coalition partners People's Party (OeVP), came a disastrous fourth and fifth with just 11 percent of the vote.

That meant that for the first time since 1945, these parties, which have long dominated politics in one of the EU's most stable democracies, had to watch the second round from the sidelines. This was also the final straw for Werner Faymann of the SPOe, who quit as chancellor on May 9.

His successor, railways boss Christian Kern, was appointed last week, with two years to win voters back from the arms of the far-right before the next scheduled general election.

Hofer, 45, boosted by growing unease about the record number of people claiming asylum last year at the height of Europe's migrant crisis, came top with 35 percent of the vote in the first round.

Following this triumph, observers thought that the professorial and unkempt Van der Bellen, 72, would have little chance of beating his polished younger rival in the runoff. "Very few people thought I could catch up," Van der Bellen said late Sunday. "But in the last 14 days there has been such a momentum among voters - musicians, actors, workers, totally different people across all generations, professions and all sections of society."

Karin Cvrtila from polling institute OGM called his surprise success an "election thriller." "He has really recovered in the past couple of weeks, partly because of a good campaign," she told AFP. The FPOe has shaken up Austrian politics and sent shock waves through Europe before.

In 2000, under then-leader Joerg Haider - who memorably praised the employment policies of the SS, Nazi Germany's elite security and military unit - it entered a coalition with the OeVP. The result was international isolation and Austria temporarily becoming a pariah in Europe.

This time, however, observers note there could be less of a backlash in light of surging support for populist parties elsewhere in Europe.

Since the end of World War II, the Austrian head of state has performed a largely ceremonial role in the gilded halls of the Hofburg, the former Habsburg palace in Vienna.

But having either Hofer or Van der Bellen as president could shake things up, potentially using hitherto untapped powers to dissolve parliament or fire the government. "You'll be amazed what a president is capable of," Hofer said during the campaign.

Europe has been witnessing a shift towards right-wing parties, which have been gaining popularity over the fear of a refugee influx. Recently, polls noted a rise in support for right-wing parties not only in Austria, but also in Poland, France and Switzerland.