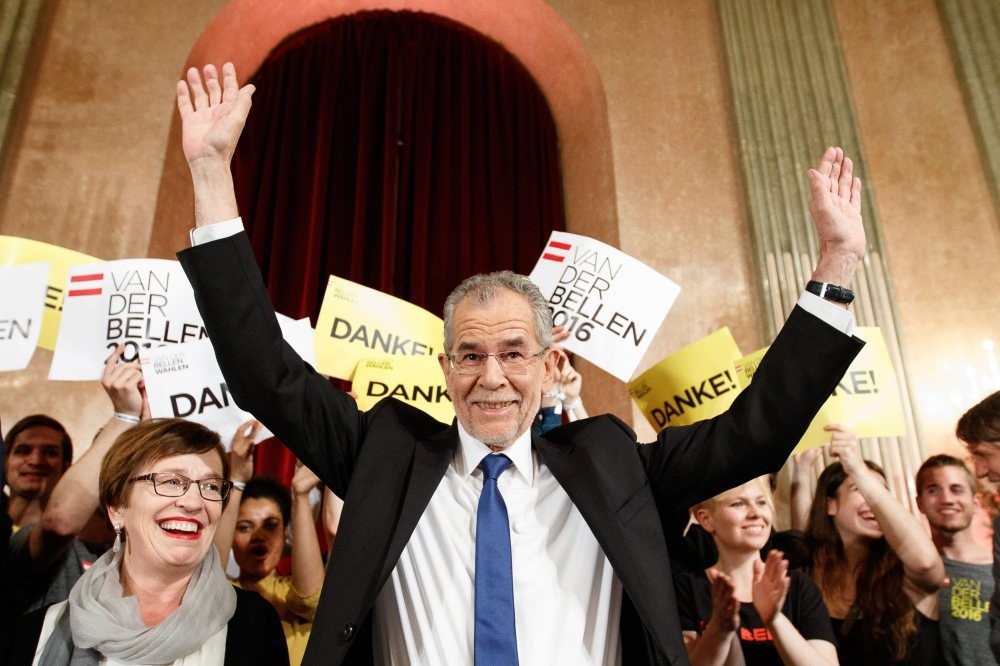 Austria's new president-elect, Alexander Van der Bellen (C), waves to supporters at the Palais Auersperg in Vienna, Austria, on May 22.
by Daily Sabah with Wires May 25, 2016 12:00 am

Van der Bellen, a Greens politician running as an independent, narrowly won the presidential election in Austria, but concerns are still high as far-right leader Hofer reflected the major political surge amid the general trend for far-right candidates across Europe

Austria's Norbert Hofer narrowly failed Monday to become the European Union's first far-right president after his ecologist rival scraped to victory in a knife-edge election that was a rude wake-up call for the continent's established parties.

Alexander Van der Bellen won 50.3 percent of the vote in Sunday's second-round, marginally ahead of 49.7 percent for Hofer, presented as the friendly and moderate face of the anti-immigration, populist Freedom Party (FPOe). The tight contest was viewed Europe-wide as a proxy fight pitting the continent's political center against its growingly strong populist and anti-establishment movements.

European mainstream parties joined Austrian supporters of Van der Bellen in congratulating him on his victory over Hofer. But with less than a percentage point separating the two, Hofer's FPOe and its allies across Europe also casted as a major political surge by one of their own, raising concerns over anti-immigrant and anti-Muslim segment.

Hofer had been narrowly ahead of Van der Bellen, a Greens politician running as an independent, after the counting of votes directly cast on Sunday. But around 700,000 absentee ballots still remained to be tallied Monday, and those numbers swung the victory to Van der Bellen. The results diminish the scenario that Austria's political landscape could immediately move away from its centrist political image through a new president who could oppose the government's EU-friendly policies and increase pressure for tighter migrant controls.

Still, the narrow margin for Van der Bellen is the latest indication that Europe's anti-establishment parties are gaining influence.

Hofer announced his defeat shortly before the official announcement in a Facebook post thanking his backers for their support. He acknowledged he is "naturally sad," adding: "I would have been happy to have cared for our wonderful country as federal president." His post said that the work of his supporters during the election is "not lost but an investment in the future." The FPOe has exploited anti-EU sentiment and fear that Austria could be overrun by refugees to become the country's most popular political force. Van der Bellen was generally supported by pro-European Union Austrians favoring humane immigration policies and others opposed to the right.

With 2.2 million Austrians voting for Hofer, Van der Bellen said Monday that he wanted to heal the rifts laid bare by the bruising election campaign. "A lot of people in this country evidently feel that they aren't being seen or heard enough," he said after the result was announced, speaking in a tone that was anything but triumphant. "We need a different culture of dialogue and a political system, which deals with people's fears and anger … I will also work toward winning the trust of Norbert Hofer's voters." Despite pledges by both candidates to be the president of all Austrians, the split vote revealed unprecedented polarization over which direction the nation should now take, particularly over migration and the EU's future. Van der Bellen sought to smooth over the differences in post-result comments.

Hofer had won the first round of voting on April 24 with 36.4 percent. His victory had been considered a success by his supporters since it was the first time a far-right candidate had received such a high vote in a presidential contest since 1945. Gun enthusiast Hofer, 45, had tapped into unease about the record number of asylum seekers at the height of Europe's migrant crisis, with his typical supporters made up of lesser-educated working-class men and in rural areas. But the self-proclaimed "gladiator" has also toned down the FPOe's message to win voters across the spectrum disillusioned with the centrist parties in the current government that have dominated national politics since 1945.

His strategy mirrored the success of other fringe political figures across Europe, most recently in elections in Cyprus on Sunday, as well as further afield as seen with the success of Donald Trump in the United States.

Europe's right, meanwhile, praised Hofer's close finish as a milestone on the path of international dominance for the right. France's National Front offered "warmest congratulations," adding: "This historic performance certainly ensures future success for all patriotic movements, in Austria and elsewhere in the world."

Frauke Petry, head of the Alternative for Germany (AfD), who was in Vienna Sunday for what had been expected to be a victory party for the FPOe, congratulated Hofer for the "outstanding result." Van der Bellen revealed he himself was a "child of refugees who has received a lot from Austria." He was born on Jan. 18, 1944, in Vienna to an aristocratic Russian father and an Estonian mother who had both fled Stalinism. He studied economics at the University of Innsbruck and finished his Ph.D. in 1970 before going on to become dean of economics at the University of Vienna two decades later.

Far-right parties are gaining strength and being voted into power in many European countries. Their typical hot button issues include keeping out refugees and skepticism toward the EU. Recently, support for far-right, anti-immigrant and Eurosceptic parties has surged in Serbia, the United Kingdom, Denmark, Finland, France, Hungary and the Netherlands.
RELATED TOPICS