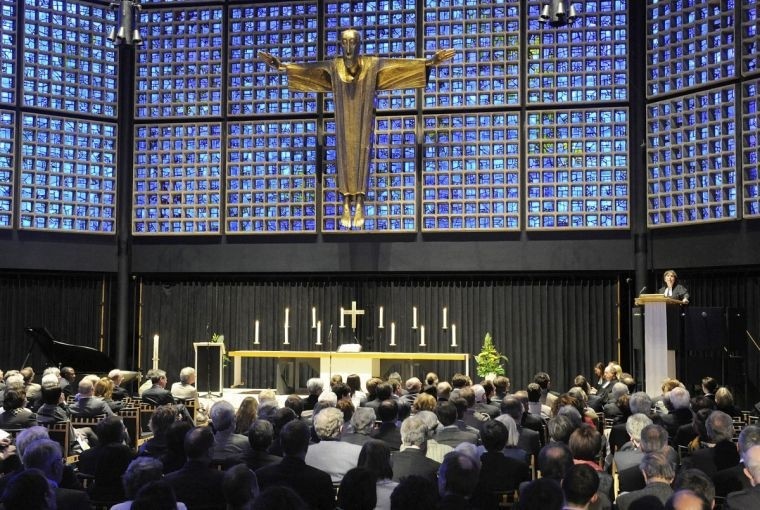 | Reuters file photo
by May 26, 2016 12:00 am
Little can be said of the last years of Florent's life other than that he left Hamburg to fight with Daesh in Syria and then died. Now a Lutheran church in Hamburg wants to stage an ecumenical service to commemorate his life and death, aware that they're breaking new ground with each step.

How do you mourn for a Daesh member? How do you reconcile his life before he left to fight with the short life he then had as a fighter? A German church is about to find out.

The controversial funeral of the young man only identified as Florent is set for Friday in the northern Germany city of Hamburg. But everything from staging a service for a Muslim in a Christian church to honouring someone who fought for a terrorist organization has raised questions.

"I have had to face a lot of criticism, asking how a pastor can celebrate a funeral for a terrorist," Lutheran pastor Sieghard Wilm told dpa in an interview. But he said he has also received support.

"We're not backing away from this tough situation," says the pastor, who knew Florent for years, partially thanks to Wilm's work at a youth centre, partially because Florent once befriended a foster child Wilm had in his care. "As humans, we don't get to make the final judgment. That's only in God's remit."

Florent's case is, without a doubt, difficult.

Inspired by tales of Daesh bravery, the Hamburg native traveled to Syria in 2015 to join its efforts to create a so-called Islamic caliphate.

However, all indications are that he quickly grew disillusioned with the reality on the battlefield.

"They just send the brothers to their death," he said in an audio message sent shortly before his death, when he was 17. He died in July under unclear circumstances.

The ceremony at the city's St Pauli church will be ecumenical, with imam Abu Ahmed Jakobi also celebrating. Much of the service will be spent remembering the victims of terrorism and violence.

"This is the first time that I've ever done a Christian-Muslim service for a Daesh member," said Wilm.

The service will also look at all facets of Florent's life, neither glossing over his faults, but also not trying to demonize him.

"All the problems he had in life will also come up," said Wilm. "It's a disastrous path he went down."

According to Hamburg authorities, Florent was born into a Christian family in Cameroon and moved to Germany as a small child. He converted to Islam when he was 14.

He also became radicalized, routinely watching videos in which Daesh members carried out acts of violence. He began to dress differently and demanded to be called Bilal instead of Florent. Wilm said the boy began to curse girls at school who didn't wear headscarves.

"We don't know when he died, or where or at whose hand," said Wilm. No corpse has been found. German intelligence services have heard rumours in Germany's Salafist scene that the boy was killed by Daesh members.

"The analysis of certain postings certainly gives the impression that some people who were considering making the trip have rethought their plans," said intelligence services spokesman Marco Haase.

A large crowd is expected at the service, since Florent was so well known in Hamburg's St Pauli district.

"They want to mourn. They've been holding on to their grief for more than a year," said Wilm.

"I think that's very brave and an important step as she processes her own grief."

Wilm says his goal is simply to remember Florent.

"I want to speak about being tempted, about the fact that you can make mistakes in this life and still remain human."
Last Update: May 26, 2016 8:44 pm
RELATED TOPICS