Anti-Turkey sentiment at the center of Brexit campaign 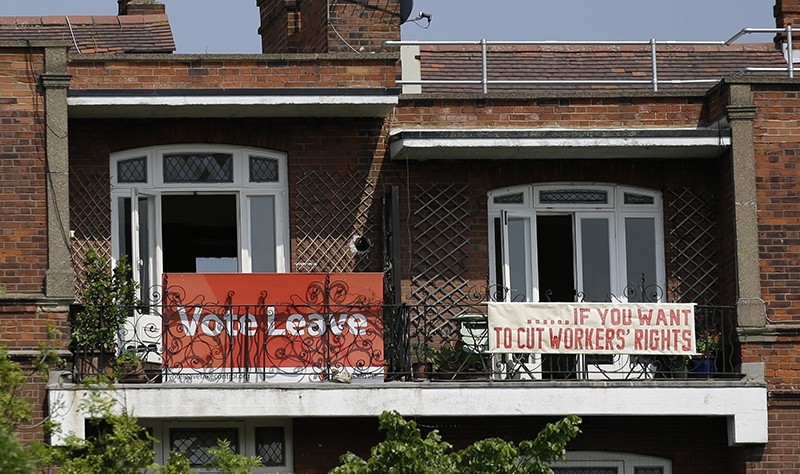 Banners of opposing views on Britain's so-called Brexit referendum on EU membership are displayed on the balconies of two neighbouring flats in the Gospel Oak area of north London, Friday, May 27, 2016 (AP Photo)
by Anadolu Agency
May 29, 2016 12:00 am

It is a greater concern to undecided voters in next month's referendum even than the state of the U.K. economy, a poll for Sky News claimed earlier this month.

The survey found that 29 percent of voters had not made up their mind on the referendum, which takes place on June 23, and that nearly a third of them believed the EU's greatest impact came through immigration.

Uncommitted voters are likely to decide the referendum's outcome, which perhaps explains the thinking behind a recent pro-Brexit poster showing a passport shaped like a door, a trail of footprints leading inside, and the words: "Turkey (population 76 million) is joining the EU."

Until the beginning of May, it was only the anti-EU U.K. Independence Party which said Britain should leave the 28-country bloc because Turkey may join.

But in recent weeks the officially designated leave campaign-Vote Leave-has taken up the message.

It is responsible for the poster campaign, denounced by Turkish Cypriot parliamentarian Baroness Hussein-Ece as "xenophobic".

"It is a very xenophobic campaign. Brexit people who want to leave the European Union are using Turkey in a very negative and unfair way. They are misrepresenting the actual facts," she told Anadolu Agency earlier this week.

A Vote Leave statement argues: "Since the birthrate in Turkey is so high, we can expect to see an additional million people added to the U.K. population from Turkey alone within eight years.

"This will not only increase the strain on Britain's public services, but it will also create a number of threats to U.K. security. Crime is far higher in Turkey than the U.K. Gun ownership is also more widespread.

"Because of the EU's free movement laws, the government will not be able to exclude Turkish criminals from entering the U.K."

For Dr. Tim Oliver, a fellow on Europe-North American relations at the London School of Economics (LSE), the Leave campaign is playing to opinions that "flirt with racism and anti-Muslim sentiments".

He told Anadolu Agency this week: "The Leave campaign aims to confuse and cast doubt, not enlighten. But it's having a very difficult campaign in terms of rebutting economic arguments about leaving, although that is not to say it's not doing well in terms of polling.

"But the polls won't shift and so it is increasingly playing to immigration and emotional issues to try and achieve this.

"This is an area the Remain campaign finds more difficult to rebut with facts and evidence, not because there isn't any but because this is more an issue that provokes gut reaction than considered opinion."

"Anyone familiar with the EU knows that accession by Turkey is not going to happen soon, if at all, not least because EU countries other than the U.K. have strong doubts about Turkish membership," he told Anadolu Agency.

"Even if Turkey were to join by, say 2025, there would be two things to bear in mind: first, that there would be a transitional period-seven years if the experience of Bulgaria and Romania is a precedent-before any free movement of workers occurred; and second, by 2030, the expected growth of the Turkish economy is likely to inhibit emigration."

Part of the reason why supposed Turkish immigration has become so prominent in the contest is that the Leave campaign is losing the economic argument, according to Sinan Ulgen, head of the Istanbul-based Center for Economics and Foreign Policy Studies.

He said that populist, anti-Turkish messages were not new on the European mainland.

"What is new here is that the subject is being openly discussed in Britain for the first time, because if you look at European politics this has been a subject used by populist parties in other European countries before," he said, adding that he did not believe the Brexit campaign would have a lasting effect on U.K.-Turkish relations.